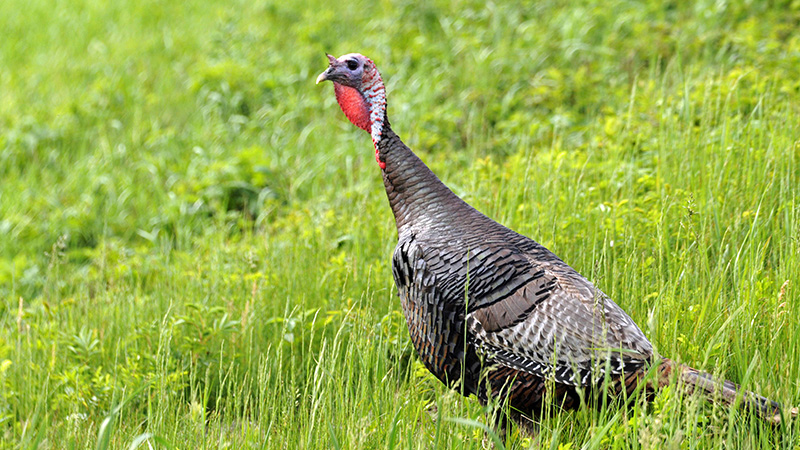 How about a few turkey topics to share around the dinner table this Thanksgiving if the conversation begins to fade?

Visitors to the Crosby Arboretum sometimes inquire about whether we have wild turkeys on the property. While I’ve never spotted them here, I’ve spotted them foraging by area roadsides and have heard stories of them making a pass-through local backyards.

Thanks to the Internet, we can view videos that cause us to give thanks that we are not the family who have been overtaken by a rafter of enormous picture-perfect turkeys calmly roosting on their suburban roof and strutting on their lawn. Yes, “rafter” is the correct term for a group of turkeys, although they are frequently called a “flock” or “gobble”.

Did you know that the wild turkey was almost our national bird? This is a true tale. When the colonies declared their independence from England, they were tasked with finding a symbol that was fitting to be placed on the new national seal. Benjamin Franklin felt that the wild turkey was a perfectly respectable choice for the new emblem. Although others favored the bald eagle, Franklin believed that eagles were lazy and vicious predators unworthy of such recognition, and that this bird was of “bad moral character”. Obviously, he was outvoted!

Turkeys are the largest North American game bird. Adult male turkeys, called toms or gobblers, can weigh up to 24 pounds. Their brightly colored feathers, in coppers, reds, and greens, come in handy when they are looking to attract females during the breeding season. Female turkeys are called hens and are much drabber in color, which helps provide camouflage when they are on their nests.

Wild turkeys forage for food on the ground, and consume berries, nuts, seeds, and sometimes even small animals such as frogs or salamanders. According to MSU Extension Service Publication 2033, “Forest Management for Wild Turkeys”, the birds will also eat insects such as grasshoppers, millipedes, insect larvae, and worms and snails. Young turkeys eat mostly insects in their first few weeks after hatching, and then will begin to pick up fruits and seeds. The Extension publication notes that most turkey nests are located within 10 yards of a forest edge, such as a logging road or firebreak.

Turkeys consume “soft mast” such as fruit from dogwood, blackberries and dewberries, huckleberries, blackgum, spicebush, muscadine, blackhaw, and wild cherries. They will also eat seeds of longleaf pine, sweetgum, and magnolia. Is this list starting to make you hungry?

According to the Extension publication, turkeys will roost in a variety of forest habitats, but most often will roost in conifers located near water. Trees such as bald cypress and spruce pine can offer them attractive habitat in such areas. Spruce pine, which is found in the Arboretum’s exhibits, is also known as “turkey pine” because its branches often will grow full to the ground, offering the birds a perfect spot for an overnight stay.

The National Wild Turkey Federation (http://www.nwtf.org/) is a national nonprofit organization established in 1973. Along with its members the organization has helped to restore land that supports North American turkey populations.  In addition to wild turkeys, hundreds of species of upland wildlife, such as quail, deer, and songbirds, have benefited from the improved habitat.

The NWTF website includes inks for sources of tree seedlings that are “ice cream” to turkeys, including Chickasaw plum, common persimmon, and southern crabapple, and oaks such as nuttall, cherrybark, shumard, water, white, and swamp chestnut oak. Acorns provide “hard mast” – the dried fruit of woody plants that fall to the forest floor, such as acorns and nuts from tree species such as hickory, pecan, walnut, and beech.

Turkeys will also consume fruit from hawthorn trees. In our area, two well-known species of hawthorn are parsley hawthorn (Crataegus marshallii) and mayhaw (Crataegus opaca). Many of you will be no stranger to tasty jelly made from mayhaw fruit, and turkeys may have to get up pretty early to beat dedicated jelly-makers to these trees. Both hawthorn species make beautiful accent trees in your home landscape because of attractive white flowers in spring. But take care when locating them in your yard as they are thorny, however, the fruit crop may cause you to quickly forgive this characteristic!

See www.crosbyarboretum.msstate.edu or visit the Arboretum’s Facebook page for more information on programs and activities. We are open Wednesday through Sunday from 9 to 5, and are this Friday if you need to take a walk after Thanksgiving Day. We’re a dog-friendly site, and leashed pets are welcome. Our public garden is located at 370 Ridge Road in Picayune, at I-59 Exit 4.

Celebrating Nature at the Crosby Arboretum!