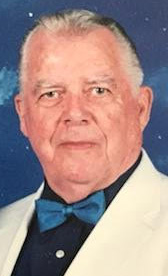 A native of New Orleans, LA, he was retired from the US Marines Corps, where he served three tours of duty in Korea, Taiwan and Vietnam.

He received the China Honor Medal for his service in Taiwan.  After he retired from the Marine Corp, Roy attended PRCC and USM where he received his degree in Art education.  He taught Art at both Picayune Jr and Sr High Schools for 6 years. Once he left teaching, he opened Roy’s Gym and operated it for 17 yrs.

During that time he had numerous Mr. Universe and Mr. American pass through.  Picayune Police Department also used his services as a sketch artist for their criminal cases.

He was a faithful member of Roseland Park Baptist Church. Roy was a loving father, grandfather, brother, uncle, and friend who will be truly missed by all who knew and loved him.

He was preceded in death by his parents, Haakon Gunval Gjertsen and Ingrid Christine Pedersen Gjertsen; his wife of 65 years, Gloria Ann Stockstill Gjertsen; and his brothers, Haakon Albert Gjertsen and Jan Arthur Gjertsen.