Two Witches, No Waiting coming to Picayune On Stage 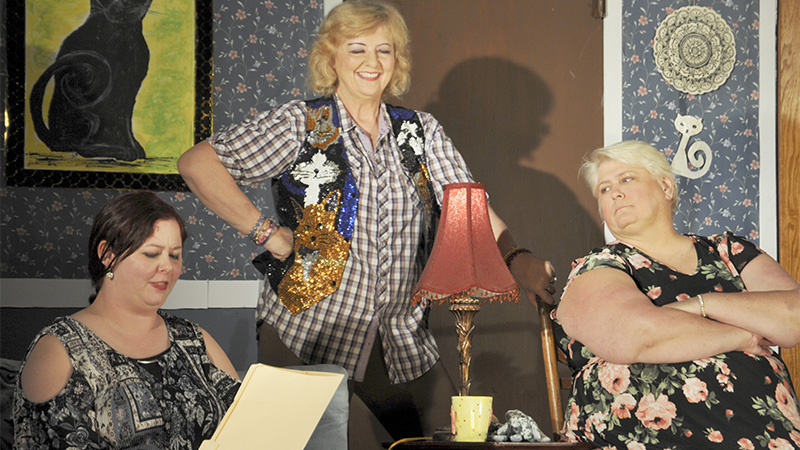 Novice and veteran actors alike gathered together backstage on Thursday night to prepare for a dress rehearsal of Picayune On Stage’s next play, Two Witches, No Waiting. Dramatic music and kooky characters made for an evening of comedic, mysterious fun.

Director Donna Aguilard said the play is a comedy about two sisters who are known around their area as witches. After their last housemaid suddenly disappears, they are on the hunt for another one.

Picayune On Stage has been working on this production for three months, and it will premier this weekend at the Waters Edge Restaurant at Hide-A-Way Lake. There will be a showing on Saturday night beginning at 6 p.m. and a showing on Sunday afternoon beginning at noon. Tickets will be $35 per person and will include a meal.

The play cast was chosen three months ago, and they have been working on perfecting the production ever since, Augilard said. The production features a range of new and seasoned actors and actresses. Augilard said it is always a pleasure to have new people. She said she enjoys seeing each person grow in their character. Some are shy on stage and some are able to express their personality with even more finesse.

Augilard said if anyone would like to make a reservation for the production they can call 601-799-1714. Reservations must be made, with tickets being paid at the door.

If anyone would like to audition for a future production, they can visit the Picayune On Stage Facebook page, they can call the number listed above, or they can send an email to picayuneonstage@yahoo.com. Augilard said now is a good time to look into being a part of the next production.