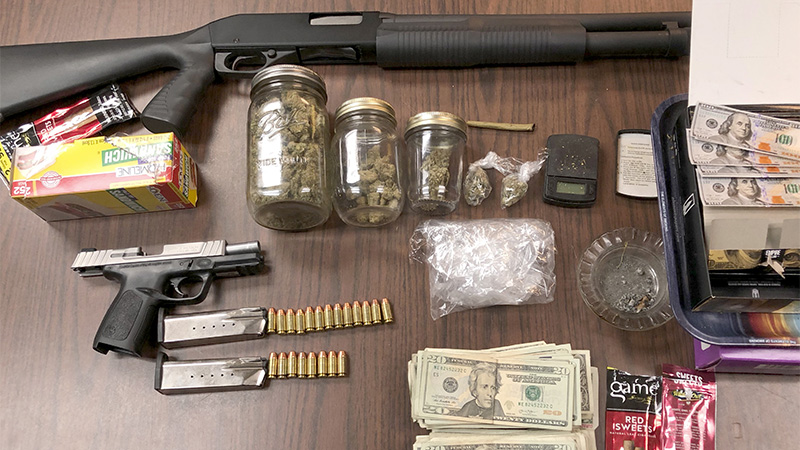 About $2,000 worth of hydroponic marijuana and several weapons were seized during Tuesday’s search of 106 Greenview Drive, Picayune. Submitted Photo

According to a departmental release, on Tuesday, Sept. 25 just after noon, Picayune Police narcotics detectives conducted a search at 106 Greenview Drive, after receiving several complaints from community members that alleged narcotics were being distributed from the home.

When they arrived at the house, detectives found Yvonne Adele Hirt, 33, of 106 Greenview Drive, in the front yard. Detectives told Hirt to put her hands behind her back, but she refused and instead allegedly lifted her hands as though she was about to fight, the release states. Hirt was immediately detained as a result.

As detectives continued into the house, they smelled a strong odor of what they believed to be marijuana, the release states. Further in the residence, detectives detained another suspect, Shabazz Kennez Magee, 35, 106 Greenview Drive, who was hiding in the bathroom in the master bedroom.

According to the release, when detectives searched the master bedroom, they found a loaded black and nickel plated Smith & Wesson .40 caliber handgun with two loaded magazines, a black Stevens 12-gauge shotgun, $950 in miscellaneous cash and a box of rolling papers. Underneath the central air conditioning unit, detectives also found two glass jars full of a green leafy substance believed to be hydroponic marijuana.

The firearms were seized since they were in proximity of narcotics.

Approximately one pound of hydroponic marijuana was seized, which has an estimated street value of $2,000.