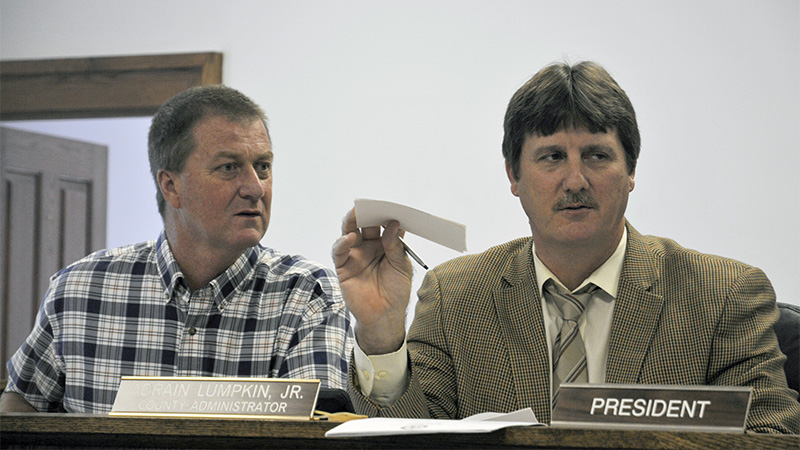 At Monday’s Board of Supervisors meeting South Mississippi Children’s Center gave an announcement, County Engineer Les Dungan updated the Board about county projects and cleanup of property on 28 Hillsdale Gumpond Road, Lumberton was approved.

Annie Jackson with South Mississippi Children’s Center began her presentation by thanking the Board for their support, but followed up with an announcement that the center will close its doors on Friday.

Jackson said the closure is due to the Family First Prevention Services Act, which she said aims to eradicate shelters in favor of putting more children in foster care. She said the government does not like when more than four or five children are placed together. In response, Jackson expects a push for more foster families in the future.

County Engineer Les Dungan said the countywide paving project is complete and submitted two requests for payment – one for the remainder of the work, and one for the retainer fee. The Board approved the payment.

Dungan said the Board needs to come up with a plan to deal with the county’s timber supported bridges. He said with the new tax diversion legislation, some counties are planning to borrow money to replace their bridges and restructure the payment to go hand-in-hand with the tax reimbursement. He said it is estimated that Pearl River County will receive approximately $839,000 per year in additional tax revenue. The yearly amount will be given in increments, with the county receiving a fourth of the payment the first year, half the next year, a third the next year and the full amount the fourth year and every afterwards.

Dungan said the money is to be used only on infrastructure. About $4 million is needed to solve the timber support issue with bridges. He advised the Board to think about borrowing the money, possibly as a bond, and repaying it over about 10 years. That would allow them to repay the loan each year while still having a little of the tax diversion left over.

“We want to make sure we don’t waste money, but we’ll need to move quickly if we want to replace these bridges,” Dungan said.

Code Official Kolby Davis gave an overview of the public hearing held in regard to dilapidated property on 28 Hillsdale Gumpond Road, Lumberton. He said only one landowner, Raymond E. Rachal, attended. Rachal had issues with the taxes he had been charged for the property, but voiced no objection to county officials moving forward with cleaning the lot. Due to the lack of objections, the Board voted to move forward with the cleanup.

Davis said there will be a lot of steps involved in cleaning up the property. Multiple surveys and inspections will need to be done to determine how the land must be cleaned and how to go about doing it.

“This isn’t a cleanup that will happen in a week,” Davis said.

Rachal approached the Board to address concerns about his taxes after Davis finished speaking. He said about 10 years ago his yearly taxes dropped significantly. He said he was concerned that the county had illegally lowered the value of his land.

Supervisor Malcom Perry said what probably happened is that taxes were higher when the gas station on that property was in operation, but they dropped when it became vacant.

Regardless, Board members told Rachal that they would take the matter up with the County Tax Assessor.

Bed and Breakfast set to open