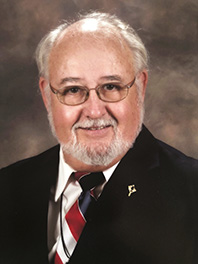 Mass of Christian Burial for Ronald Devald Young, age 80, of Picayune, MS, who passed away Friday, September 21, 2018, will be held at 11:00 am on Saturday, September 29, 2018, at St. Charles Borromeo Catholic Church. Father Bernard Papania will officiate the service. Visitation will precede the Mass of Christian Burial at 10:00 am.
Born in Washington, DC, Ron moved as a young boy to Forest Grove, OR, where he spent the remainder of his formative years.  A lifelong admirer of orchestral music, Ron spent his first year of college studying music at the University of Oregon before deciding “symphony players don’t make enough money to live on.” He would go on to receive a Bachelor of Science in Business and Technology – Business Administration from Oregon State University in 1960 and, after serving three years in the U.S. Army, a Bachelor of Science in Engineering (Mechanical) from Oregon State University in 1966. Ron loved the ocean and became an avid scuba diver during college. Following his studies, work brought him back to the Washington, DC area, where he established a thirty-year career with the Department of the Navy designing submarines tasked with deep-sea missions as part of the Deep Submergence Group. Considered an expert in his field, he received many commendations for his work.
Ron moved his young family to Picayune, MS in 1987. He soon became heavily involved with Saint Charles Borromeo Catholic Church. A deeply treasured member of the parish, Ron held a passion for religious studies and education. Following nearly two decades of teaching RCIA and other classes for the parish, Ron continued to lead several weekly bible classes throughout the remainder of his life. Retiring while his sons still attended grade-school allowed him to be a near-constant presence in the lives of his sons. He often served as “Room Dad” for school functions, never missed a sporting event, and always helped with homework after school. He remains lovingly remembered as a man of few words, which underscored the purposefulness and significance of any advice given to his sons as they grew older. Ron also enjoyed his grandchildren, especially reading to them and playing chess or other games during their time together. He leaves a legacy of dry-wit, intellectual curiosity, and voracious appetite for reading appreciated by all who knew him.
Ron was preceded in death by his father, Vilas Devald Young, and mother, Lucille Everson Young. Left to cherish his memory are his two sons, Michael Vincent Young and Christopher Matthew Young, along with his loving daughter-in-law, Rachelle (Youngblood) Young, and four grandchildren, Michael Vincent Jr., Adeline Isabelle, John Paul Augustine, and Evana Constance Young.
Arrangements are under the direction of McDonald Funeral Home. Obituary, Register Book, and Driving Directions can be found on the internet page, at www.mcdonaldfh.com <http://www.mcdonaldfh.com/>. Contributions in lieu of flowers may be made to Catholic Answers (https://give.catholic.com/give/201239/#!/donation/checkout <https://give.catholic.com/give/201239/>).
You Might Like

Harlon Joe Hufford of Carriere, Mississippi passed away September 25, 2018 at the age of 61. Memorial Services will be... read more