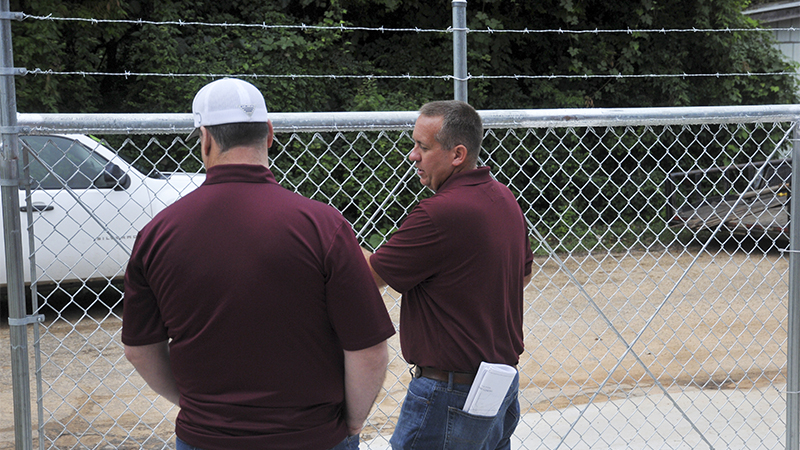 Poplarville Mayor Rossie Creel and Alderman Russell Miller joined Engineer Jason Lamb and Public Works Superintendent Sam Hale at the new facility to determine if anything needs to be changed before it is deemed complete.

The major concern at the facility seemed to be the potential drainage issues. Because the building is situated at the bottom of a hill, extra work had to be done to ensure the facility is safe from flooding, Lamb said during previous Board of Aldermen meetings.

Besides that, only a few small fixes were pointed out, such as some minor lighting problems and areas of the wall that needed extra paint. Lamb said after those minor changes have been completed, the last phase of the project is to provide gas service to the building. The gas company has informed them that it will be approximately two weeks before this can happen, he said. Lamb said he hopes the facility will be ready for occupancy within the next 30 days.

Hale said that the facility that currently houses the Public Works Department was built around 1970. It was originally a fire station, but when the fire department moved, the Public Works Department moved in. In the old building, the inside of the walls are deteriorating and there is no room for vehicles to load and unload, meaning workers sometimes have to work in heavy rain.

Miller said everyone has worked hard to ensure this new facility was available for Hale and his crew.

Over at the new City Square Park, all of the contractual work has been completed. The lights are up, the sod is in and there are 18 new public parking spots and two handicap spots. An additional electrical box has even been installed to provide power to those using the park for events, Lamb said.

While the park is complete on the developer’s side, Lamb said it will be up to the city to announce a date for the park to open to the public.

Creel said while Railroad Street and East Erlanger Street are ready to be reopened and redirected, he was informed by City Attorney Manya Creel Bryan that the city cannot reopen the streets until an official public hearing is held and residents are given the chance to appear before the Board of Aldermen to voice any concerns.

Five arrested during roundup in county