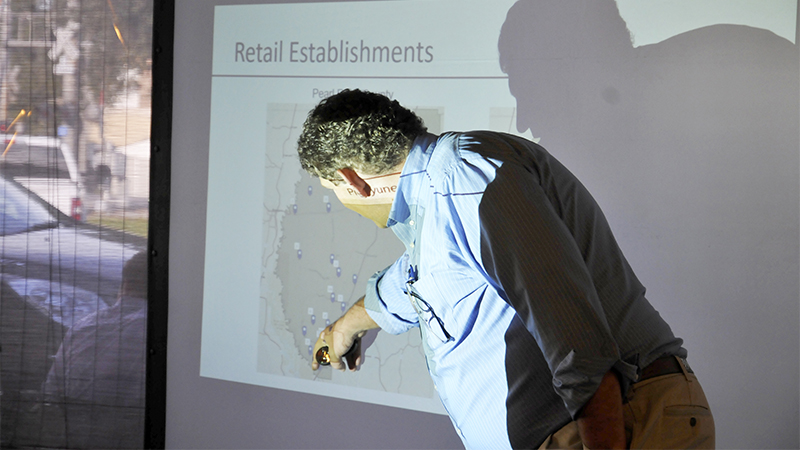 MSU Extension Agent Alan Barefield gives a presentation on Pearl River County’s economy and retail leakage before providing the audience with several suggestions on ways to correct the problem. Photo by Leah McEwen

On Thursday community members and local government officials met together to discuss the County’s economic development and revenue leakage at PJs.

Mississippi State University Extension Agent Alan Barefield gave a presentation on retail sales and revenue leakage in Picayune, Poplarville and Pearl River County as a whole. Barefield said that Pearl River County’s economic situation is unique, because more than half the local residents travel outside of PRC for work.

“If a person works outside of the county, where are they going to get their groceries and do their shopping?” He asked.

Barefield said if the average amount of money residents in the county spend in retail venues, compared to the national average (with income taken into consideration,) local residents spend less than they should. On a 1:1 ratio (which is the ratio of amount spent vs. the national average), Pearl River County is stuck at a .6:1 ratio. This means residents only spend about 60 percent of their money within the county. The other 40 percent of potential revenue leaks out into the surrounding areas.

Within Picayune itself, that .6:1 pull factor skyrockets to 2.5:1. In Poplarville, the pull factor is between 1.5-2:1, Barefield said. While those numbers seem positive, since the county’s percentage is so low, that additional revenue coming into the two cities is most likely coming from visitors stopping in while traveling down the interstate.

There are several ways that retail spending can be brought back into the local economy, Barefield said. First, he said businesses around the county should focus more on the industries they have an advantage in. The local economy is heavily reliant on mining operations, so Barefield suggested focusing on mining technologies, building materials, etc.

Another way to bring spending back into the county would be for local businesses to offer a “shop at home” option for their customers. If customers can purchase items online, it would make the stores more accessible to them. Plus, with new internet tax laws, the cities and county would still benefit from those sales, Barefield said.