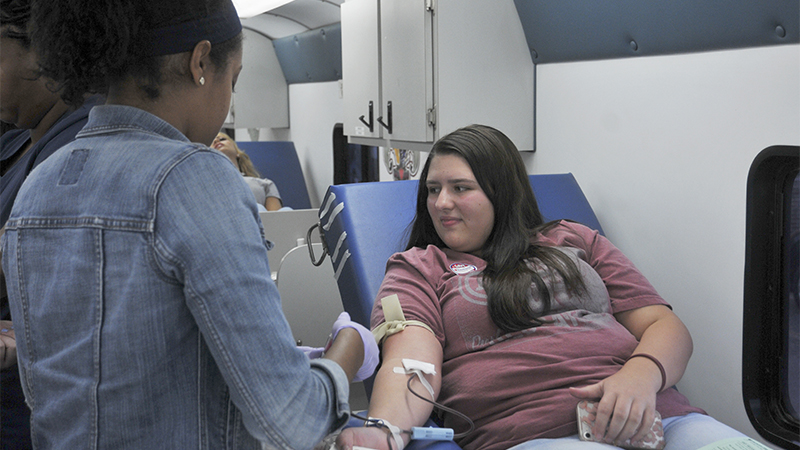 Pearl River Central High School held one of its biannual blood drives Friday to encourage students, faculty and the community to donate.

The Blood Center account representative Kristi Womack said the organization holds blood drives at high schools and elementary schools annually in South Mississippi and Louisiana. Every unit of blood donated during a blood drives at the school goes toward a scholarship The Blood Center awards to participating schools, Womack said. Scholarships are awarded in increments depending on how many units are donated. Once PRCHS receives a scholarship, faculty members decide how it will be used, she said.

Seniors who donate blood at both events during their final year are recognized with an award and a community service certificate.

Although a donor must be 16-years-old or older, The Blood Center also holds drives at elementary schools where students are tasked with recruiting people to donate. If one person donates on the student’s behalf, the child will receive a T-shirt. If two or more people donate on their behalf, the child will be invited to participate in an event, such as an ice cream party, Womack said.

Womack said the average age of donors is on the rise, so they are doing everything they can to reach out to the youth and help them understand the importance of donating blood. Womack said PRCHS always does a phenomenal job at the biannual drives bringing in a lot of units.

Science teacher and co-sponsor of PRCHS’s National Honor Society Ashley Wagoner, said this is the Honor Society’s first year to sponsor the event. She said since the society is focused on service, sponsoring the blood drive is a way for students to give back to the community. A large number of the society’s members attended the event and donated their time doing whatever they needed to help, whether that included helping donors sign in, or helping them get back to their vehicles or classrooms.

“These students are able to show their character and help. They’re making sure everyone is cared for,” Wagoner said.