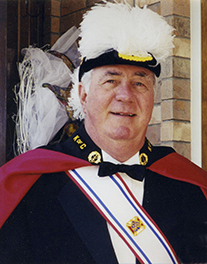 Rev. John Noone will officiate the service.

A native of New Orleans, LA, he was a Marine Oil/Gas Insurance Salesman  and a member of St. Charles Borromeo Catholic Church. Jim was U.S. Navy Honorably Discharged with the rank of Second Class Petty Officer. He earned the coveted Naval Air Crew Wings, while attached AIRASRON31. He participated in Flight Operations in both the North Atlantic and Mediterranean Sea.

Jim graduated from Chalmette High School, Loyola University of the South, City College with a degree in Commercial Sciences, Cumlade. He was inducted into Blue Key Honor Fraternity, Crossed Keys Honor Fraternity, and Who’s Who in America’s Universities and Colleges. He served 4 years as a City College Representative to the Student Government Assoc. The last year, he was treasurer of the Student Government Assoc.

Jim completed a 35 year career in Energy Insurance, and was early retired as President of Southern Marine Underwriters. He served on the National Board of Directors of the Sedgwick Federation of Companies in the United States.

As a resident of Chalmette, LA, he was involved in coaching football, basketball, and baseball. His teams won parish wide championships in all three sports. A past president of the Versailles Booster Club.

He was preceded in death by his parents, James J. Danton and Anna Buttone Whittle; and his son, Gregory Paul Danton.