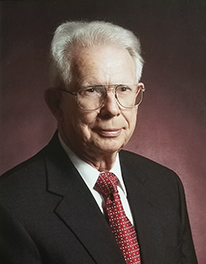 He was preceded in death by his parents Floyd and Freda Pearson, brothers Oliver and Carlie Pearson, all of the Picayune area where he was born.

On the day after graduation from Picayune High School where he had served as president of his senior class, Gwendell proudly enlisted in the Picayune National Guard which had been inducted into the United States Army as the 138th Pontoon Bridge Engineering Company. The unit was called to serve in Korea.

Gwendell was a 1974 graduate of the University of Southern Mississippi. He was employed by the Mississippi Employment Security Commission as Chief of Contributions and Status, the tax department. Before his illness, he was an active member since 1976 of the First Baptist Church of Clinton.  He taught many younger teenagers in Sunday School both in Picayune and Clinton where he also served as a deacon in both towns.

After retirement in 1994, Gwendell and Glenna spent many happy years traveling in their RV across the United States for weeks at a time.  They delighted in the beauty and wonder of God’s creation. On Sundays, they worshipped in churches small to large.  They also made many bus trips with fellow church members.

Because he had given his body to the University Medical School for use in training future doctors, a memorial service will be held Thursday, September 6, 2018 at First Baptist Church Clinton at 2:00 with visitation 1 hour prior to the service. In lieu of flowers, donations may be given to the Missions Ministry of First Baptist Church, 100 E. College St., Clinton, MS  39056.