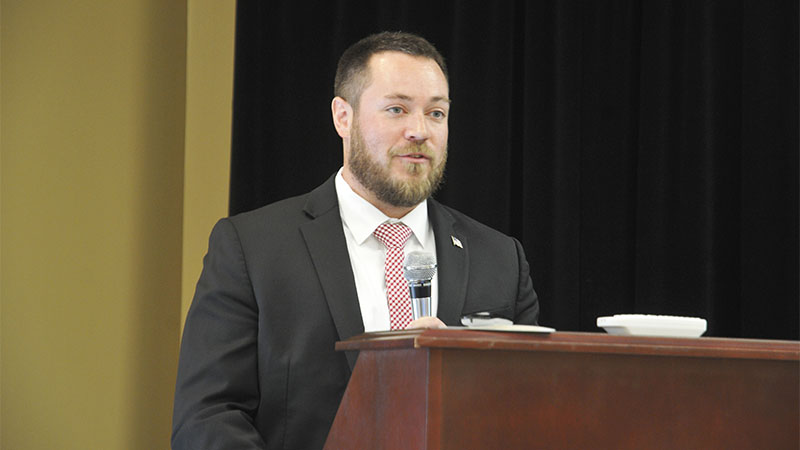 Agents Chris Worshek and Stephen King came to PRCC to give a presentation on cyber crime and how to avoid becoming a victim. Photo by Leah McEwen

On Tuesday, two agents with the FBI Cyber Security Division in Jackson gave a presentation at Pearl River Community College about cyber crime and how to avoid becoming a victim during Poplarville Chamber of Commerce’s Lunch and Learn.

Special Agent Chris Worshek began by speaking about the different types of cyber crime. He said there are two main kinds of crimes – national security threats and crimes against citizens. National security threats are typically sponsored by a foreign state for intelligence purposes, while crimes against businesses and individuals are usually perpetrated to make money. He said cyber crime is a big business, with billions of dollars being siphoned out of the United States every year.

Worshek said cyber thieves accomplish their goals through multiple methods. A popular one is “spear phishing.” This is when an email is made to look like a friend, family member or colleague is sending it. These messages often include a malicious link that will download malware onto the victim’s device. Messages also sometimes include requests for money. Since these emails are made to look like they are from a trusted person; many people fall victim to these crimes.

These types of “phishing” emails are especially dangerous in an office environment, Worshek said. They can lead to employees haphazardly wiring thousands or even millions of dollars to scammers. Worshek said they usually get at least one call daily from a business owner who lost money to phishing.

Criminals also use ransomware, which is downloaded onto a business’ computer system and holds it hostage until a payment is made. Worshek said it is always important to keep evidence of the ransomware on a system, rather than trying to delete it.

Task Force Officer Stephen King said cyber criminals also use social media to attack users. He said it is important to have a password that is at least 16 characters long and includes symbols and uppercase letters. He said people will use social media networks such as Facebook to find a person’s date of birth, family names and place of employment and use all of that information to try to guess the password. Worshek said instead of coming up with a 16-character password that is a jumble of letters and figures, it is easier to use a sentence or phrase, with dollar signs instead of “s” and spaces wherever possible.

Warshek said many cyber criminals are located in other countries, making it difficult to locate them and shut down their operations. He said Nigeria and some countries in Asia are notorious for having groups responsible for these thefts. He said since they can’t shut down every group out there, the best way to fight them is to be vigilant and aware to avoid becoming a victim in the first place.

Warshek said concerns or reports should be submitted to IC3.gov.