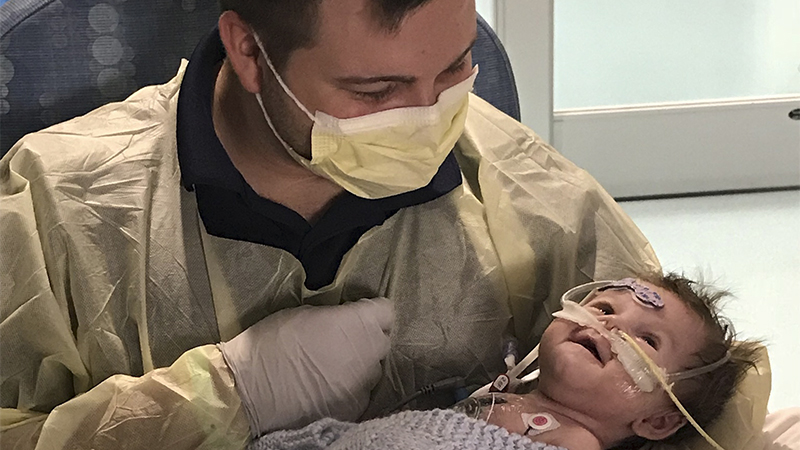 Smile for dad: Justin Kozerski is finally able to hold his son, Jase. The time Jase’s parents can hold him is limited for his safety. Photo by Leah McEwen

Amanda Kozerski had a typical, healthy pregnancy when carrying her second son, Jase. However, just before his birth on June 10, Jase suffered a complication.

Jase’s grandmother Aimee Barquero said not long before the emergency C-section, Jase suffered a clot in his heart that led to a massive heart attack. He miraculously survived, but had to be transferred to several specialty hospitals before finally ending up at Shands Children’s Hospital in Gainesville, Fla.

Barquero said doctors told Kozerski that Jase’s heart was unlikely to heal on its own, so he was listed as a 1A candidate for a heart transplant. To keep him alive, Jase was given a feeding tube and received surgery to place him on a Berlin Heart machine. Since being admitted to the hospital, Jase’s condition has improved slightly. Now, he no longer needs the assistance of a ventilator. However, his condition is still critical, and Kozerski and her husband have only been able to hold him a few times since his birth.

Barquero said no one seems to know why Jase had a heart attack after a seemingly healthy pregnancy. Now that he has been placed on a transplant list, Jase must wait until a compatible heart becomes available, Barquero said.

“The outpouring of love that we’ve gotten from everyone is unbelievable. Our prayers are being answered,” Barquero said.

Kozerski said she, her husband and her eldest son had to move away from their home and are staying in the Ronald McDonald house near the hospital. Kozerski said her eldest son doesn’t understand what’s going on, since he is only 2-years-old, but he has been handling the chaos well.

To help raise money to cover the family’s medical expenses, Kozerski’s aunt, Wendy Koglaiti is organizing a fundraiser at Jack Read Park in Picayune on Oct. 20, from 11 a.m. to 2 p.m.. Members of the Masonic Lodge in Carriere have volunteered to grill chicken for the event. Some local businesses have also offered to provide side dishes, Koglaiti said.

The couple also has a gofundme account that can be found at https://www.gofundme.com/33eum-prayers-for-jace.