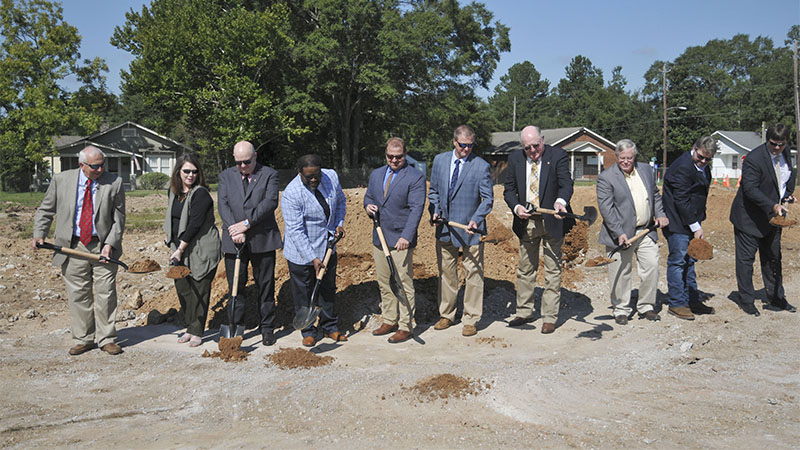 The County Board of Supervisors and several local officials gathered together on Friday to break the ground of the new county court annex building. By Leah McEwen

Friday morning the Pearl River County Board of Supervisors and several other government officials broke ground at the site of the new county courthouse annex building.

Board President Sandy Kane Smith said building the annex is a milestone the Board has been working toward for the past 12 years. He said it has been a tug-of-war for years, but thanked the Board for coming together to make the project a reality.

District III Supervisor Hudson Holliday said that 100 years ago the current county courthouse was built. He said that without heavy machinery or electricity, leaders stepped up to build that courthouse for the community. It is his hope that the current Board can honor their predecessors with this new annex building.

“Leadership does what it needs to do,” Holliday said.

After the groundbreaking, Smith said the plan is for the building to be complete by next November. He said the construction company was very adamant about starting on a dry day like Friday, since inclement weather can slow construction.

Smith said he is proud to say that taxes will not be increased to cover the cost of construction of the building. He said the Board considered self-contracting the construction, but after such low bids came in, they were able to hire Hanco Corp. for the job. The bid that was approved to construct the building was for $700,000, he said.

Billy Carr with Hanco Corp. said October is typically considered the driest month of the year, so they are hoping to get a lot done during that time. He said it shouldn’t be long before they are able to get the slab set and start installing steel beams.