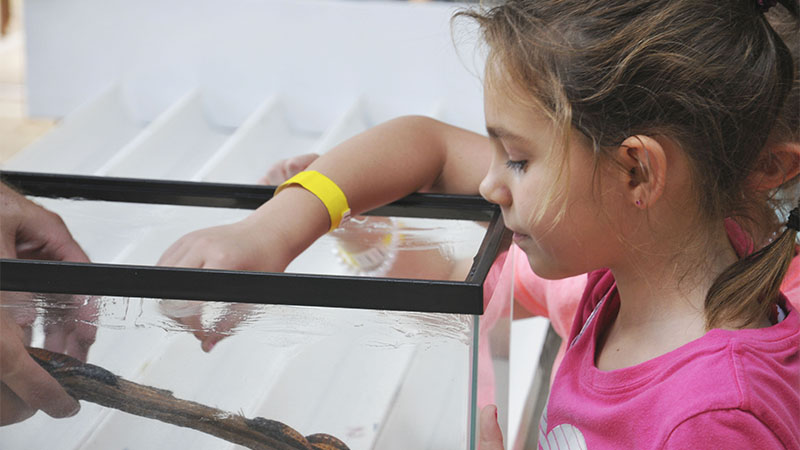 Homeschooler Kate McLendon reaches in to grab a hissing roach from its aquarium at Crosby Arboretum's annual Bugfest. Photo by Leah McEwen

Friday morning, dozens of local homeschool students and their families filed into the Crosby Arboretum for the first day of the annual Bugfest.

Several extension agents from Mississippi State University were present to teach children about a variety of insects. Volunteers were there to show children the best ways to catch bugs, how to preserve them and how to put them on display. There were also several breeds of insects from MSU’s arthropod zoo.

Arboretum Director Pat Drackett said the morning saw a number of visitors, but there weren’t quite as many as previous years. However, she said the lower turnout was positive, since the students were able to get more hands-on time with the insects and learn more from the workers.

Drackett said while the Arboretum provides the venue, the event is put on by MSU Extension Service.

“We’re so excited every year they come down and put it on for us,” Drackett said. “There are a lot of people behind the scenes making this happen.”

Pearl River County Extension Agent Dr. Eddie Smith was in charge of the Madagascar hissing cockroach station, where he showed children how to properly hold the insects. After children were finished holding the roaches, Smith lined them up on a small “track” to have the bugs race.

A few booths down, local beekeeper Buddy Broadway displayed a small hive of bees through glass. Bees could be seen tending to the nest. Broadway said he often comes across children who are afraid of bees, possibly because they were stung in the past. He said most of the time honeybees won’t sting unless they feel threatened or that their home is threatened. Most children confuse honeybees with hornets, wasps and yellow jackets, making them afraid of honeybees as well. Broadway said it’s important to teach children to respect bees, since they are important for the environment.

At other booths children could learn how to create their own bug collection in a decorative using straight pins.

Friday afternoon, the event opened up to the public for the night walk, during which black lights were used to light up sheets to attract nocturnal insects.

The Arboretum’s Bugfest will continue today from 10 a.m. to 1 p.m. The Audubon Bugmobile will be present, along with speakers who will give presentations about gardening, pest control and pollinator plants.

Guatemala man sentenced to 30 years for trafficking through…