Board of aldermen discuss personnel matters at special meeting 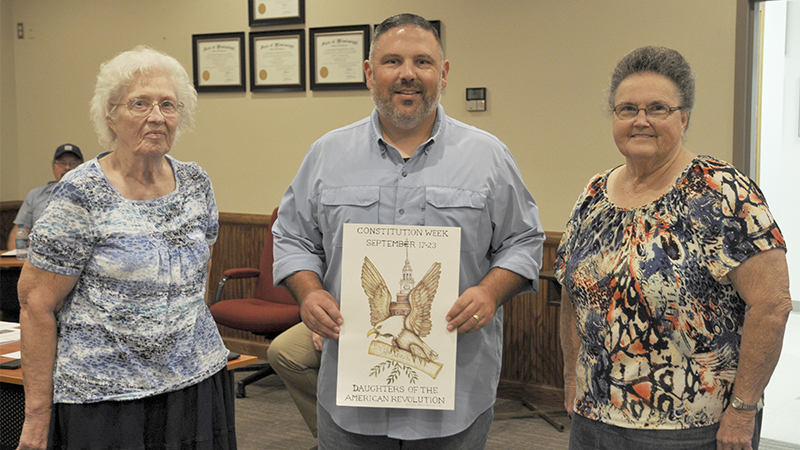 Margaret Anne Ulerich and Gloria Penton present Poplarville Mayor Rossie Creel (center) with a small poster after the Board signed a proclamation making the week of Sept. 17-23 Constitution Week. Photo by Leah McEwen

Tuesday night, Poplarville Mayor Rossie Creel called a special meeting of the Board of Aldermen to go over topics that were supposed to be discussed at last week’s regular meeting. Last week’s meeting was rescheduled due to the weather.

At the beginning of Tuesday’s meeting, Gloria Penton and Margaret Anne Ulerich, members of the Picayune Chapter of the Daughters of the American Revolution came before the Board to ask the city to declare Sept. 17-23 as Constitution Week, which was approved by the Board.

Hattiesburg Attorney Christopher M. Howdeshell came before the Board to discuss his candidacy for Chancery Court Judge. He said Chancery judges cover a lot of issues, such as divorce and custody disputes. Because these judges act without a jury, it’s important to have someone in office who listens to the facts and judges a case based on the law and not emotion, he said.

During a previous meeting the Board approved the purchase of a Dodge Ram 2500-ST 6.4 liter pickup truck for the Water Department. With state contract pricing, the total cost would be $26,615. However, that particular truck won’t be available for purchase during this fiscal year, Creel said.

Because of this, Public Works superintendent Sam Hale asked that the city to purchase a similar truck that is a little more expensive. The new truck would be available at a cost increase of $455. Creel said the bank note would be the same, so the city would just have to come up with funds to cover the extra $455.

The Board approved the request.

Alderwoman Shirley Wiltshire said she was concerned that Dunston was being moved to a different position so soon after being hired. Although Dunston has done well so far Wiltshire had reservations about promoting her to the position of Municipal Court Clerk.

O’Neal said the move would not be a promotion, since there would be no increase in pay. The job was advertised internally, with only Dunston expressing interest and fitting the requirements for the position.

Alderman Russell Miller said he thought it would be better to move her now and train her in the new department rather than train her as Deputy Clerk and then re-train her for Municipal Court Clerk later down the line.

During a vote on the matter, Tillman and Wiltshire voted against, while Miller, Alderwoman Anne Smith and Alderman Tony Smith voted for the change.

After the motion passed, authorization was requested for Dunston to be sent to the Mississippi Judicial College’s Municipal Court Clerks Annual Conference. O’Neal said the training was mandatory and would not cost the city anything.

Finally, authorization was requested to advertise for the position of deputy clerk since Dunston would be moved to the Municipal Court Clerk position. Miller, Anne Smith and Tony Smith voted for and Wiltshire voted against. Tillman briefly left the boardroom prior to a vote being taken on the matter.

Suspect in murder case not issued bond, told to…