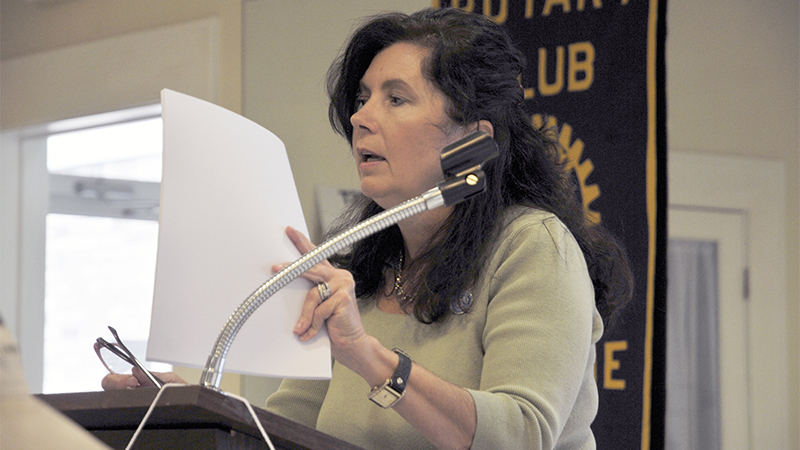 Senator Angela Hill gives a presentation about the One Lake project to the Picayune Rotary Club. Photo by Leah McEwen

Senator Angela Hill gave a presentation to the Picayune Rotary Club Tuesday morning about the “One Lake Project,” its potential impact on the environment and what she is trying to do to prevent it from moving forward.

The One Lake Project is a proposed solution to potential flooding issues in Hinds and Rankin County. If it moves forward, developers would dredge a large portion of the Pearl River, build levees and construct a massive lake to control water flow, Hill said. However, many environmental specialists contend that tampering with the river in this way would cause disastrous effects to the environment and local economies along the river south of Jackson.

In addition, the project would be costly to tax payers. Hill said developers are claiming that the project will cost a little over $300 million. However, her own research shows the cost could be $8 to $9 billion after all mitigation is complete.

The Mississippi Corps of Engineers stated that they prefer a simple levee plan, as it would be simpler, cheaper and would provide a more straight-forward solution to potential flooding, Hill said. However, Hill said they seem to have taken a back seat in this project, and have not done much to push their recommendation.

Hill said she has not heard whether the project will receive federal funding. However, she said even if they received funding, she doubts they would be able to move forward. So many environmental and government agencies around Mississippi and Louisiana have spoken up against the project, Hill said she expects any federal money to be tied up in lawsuits almost immediately.

Hill said she not only wants to protect the Pearl River from tampering, but she wants to start working toward cleaning it up as well. She said she is working with other officials in South Mississippi and Louisiana to determine how much of money from the BP settlement can maintain and clean the Pearl River.