Poplarville students to get free screenings 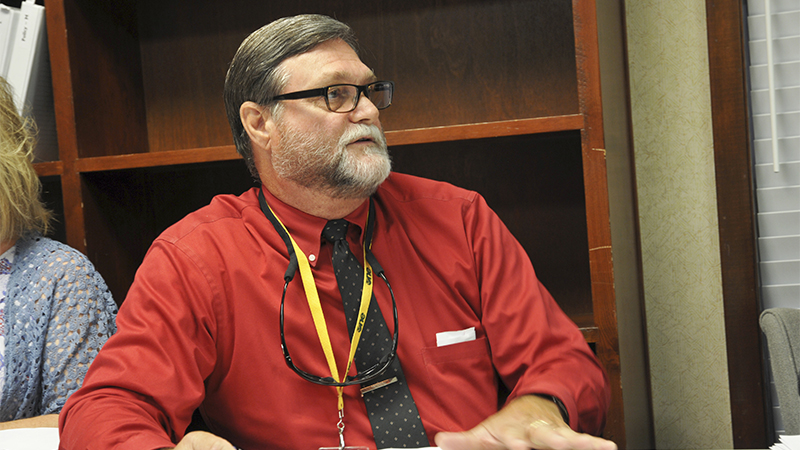 NO MAKE UP: Poplarville Superintendent Carl Merritt discusses the emergency resolution with the Board and asks that they agree to waive the day that school was canceled last week. Photo by Leah McEwen

During the Poplarville School Board of Trustees’ meeting Monday night, the Board approved an emergency resolution, the 2017-2018 amended budget and the Pearl River Family Clinic’s offer to provide early prevention screenings at the schools.

At the beginning of the meeting, Pearl River Family Clinic Family Nurse Practitioner Grace Ford asked the Board to allow her staff to conduct preliminary health checks for students on the campus.

She said many students don’t have access to regular health care, or don’t have the chance to visit the doctor unless something is seriously wrong. Pearl River County has one of the highest rates of children in foster care in the state, she said. This number gives healthcare professionals an insight into the numbers of neglected children who may have fallen through the cracks. Ford said she wants to reach these children early and provide the screenings they need.

Ford said her staff will conduct vision and hearing tests, check their vitals and see if the children are anemic or diabetic. Before the screenings, parents will be given consent forms to sign and will be asked to provide family medical history. If children are on a medical plan, that checkup’s fee will be processed through the insurance company. If they do not have any medical coverage, the Pearl River County Hospital and Nursing Home’s Board has agreed to waive the fees as a way to give back to the community.

“This is a great service. A lot of children would not have access to this otherwise,” Superintendent Carl Merritt said.

The Board approved a motion to allow the health screenings.

In another matter, Merritt said that since school was canceled for a day or more last week due to the tropical storm, he asked if the Board would waive that day so the District wouldn’t have to make it up. The request was approved.

Several months ago, the city donated a plot of land behind the lower elementary campus to the District, Merritt said. Before accepting the donation, the District was required to have the land tested to ensure the soil wasn’t contaminated. After preliminary testing, it was found that underground tanks were on the site at one point, requiring costly retesting, Merritt said. If the second round of testing proved the soil was contaminated, the District would be responsible for cleaning it, which would accrue even more expense.

Although the land could have been used by the school, the Board approved a motion to rescind the donation and give the land back to the city.

The Board also passed a motion to allow Mississippi Power to replace several bulbs at the high school campus. Because replacing the bulbs will require specialized equipment, Mississippi Power agreed to conduct an extensive check of the lighting systems to ensure nothing else needs to be replaced.