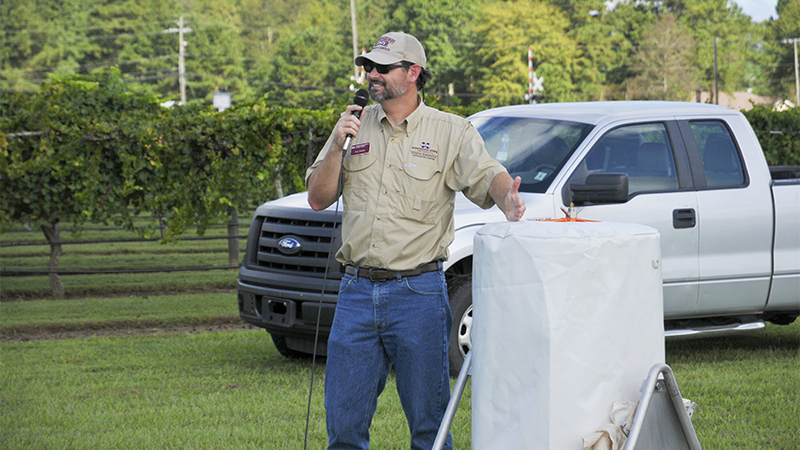 Associate extension agent and research specialist Eric Stafne showcased a muscadine juicer and discussed which variety of the fruit is best for making wine. Photo by Leah McEwen

Despite the annual event being moved from the weekend to a Thursday, this year’s Muscadine Field Day held by the Mississippi University Extension was still a hit.

More than a hundred people came to the McNeill Research Unit to listen to professionals discuss the best ways to grow muscadines. Before the event began, documentation about managing muscadines was handed out to each attendee. From 9 to 10 a.m., participants learned how different insects interact with the fruit and how they are pollinated, different growing techniques, how to prevent disease, which variety to choose, and which variety is best for making wine.

After the presentation, participants were given large plastic bags and set loose among the vines to taste and pick the red, green and even gold hued grapes as they pleased. Every variety was carefully labeled.

Soon exclamations of, “this one is my favorite,” and “I won’t be able to eat lunch after this,” could be heard from the crowd as they moved from vine to vine, filling their bags.

Associate Extension Agent and Research Specialist Eric Stafne said the event saw a larger turnout than he expected. He said the event has been held annually for more than 20 years and just recently started bringing in numbers in the triple digits. The event was previously held on a Saturday, but was moved to a Thursday after the crowds grew too large, Stafne said. However, even though the event was held on a weekday, there wasn’t a dent in the numbers, he said.

There are more than 40 varieties of muscadine grown at the McNeill Research Unit, Stafne said. He said that he hopes these yearly events will encourage locals to try their hand at growing muscadines at home. Since they are a local plant, they are perfectly suited to the environment. Plus, the fruit is a quick, healthy snack that can also be made into juice or wine, he said.

Stafne said there aren’t many commercial muscadine growers in Mississippi, so he hopes some day the event may encourage an enthusiast into starting their own venture.