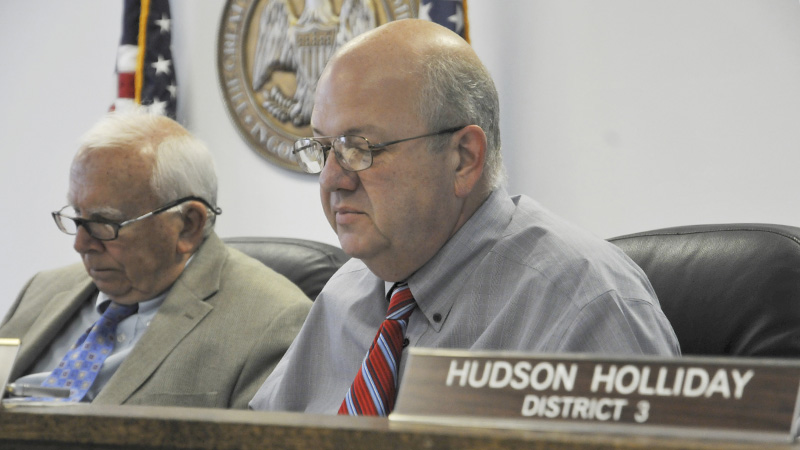 Supervisor Farron Moeller discusses his concerns in regard to bus turnarounds in the Picayune School district. Photo by Leah McEwen

Members of the Pearl River County Board of Supervisors discussed infrastructure and building code changes and heard from Chancery Court Judge candidates during Wednesday’s meeting.

During the meeting, Bob Marshall and Joseph Turney, both 10th Chancery Court Judge candidates, came before the Board to discuss their qualifications and ask for support in the upcoming Nov. 6 election.

Afterwards, county engineer Les Dungan came before the Board to give an update about infrastructure repairs. Dungan said that there are currently 34 timber supported bridges in the county – many of which have had significant issues in the past. He said the budget to replace those bridges is tentatively $4 million.

Dungan said there is a lot of money coming out of Internet sales that will soon be given to the state. He said those funds will be distributed to municipalities in need of additional infrastructure repair funds.

Dungan said they have recently been working on an inter-local agreement with Picayune to determine which roads fall under the responsibility of the city, and which fall under the responsibility of the county. He said a map will be drawn up displaying the roads that run along the city limits of Picayune to create a document that will define who is responsible. He said this map will include Jackson Landing Road, Union School Road, and several other roads in that area.

Pearl River County Road Manager Charlie Schielder came before the Board to request that his staff be allowed to continue the beaver control program for the upcoming fiscal year. He said there are approximately 20 sites where they regularly have to trap beavers and clear areas where the animals have blocked the drainage features. He said a man has been on contract to conduct the work regularly, and they have been very happy with his performance.

“$7,500 is pretty cheap for what he does,” Supervisor Farron Moeller said.

A motion was passed to continue the beaver program.

Moeller also requested that the Picayune and Poplarville school districts be allowed to add additional bus turnarounds. The motion passed.

“I want to commend you publicly about the quality of work you are doing. People are realizing that we are making a lot of progress,” Supervisor Hudson Holliday said.