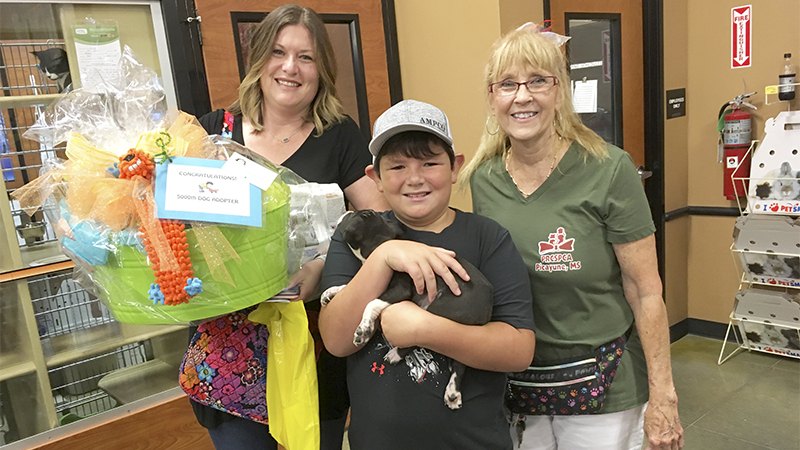 From left, Brande Kirby and Carter Kirby stand next to SPCA Volunteer Coordinator Connie Freeman after adopting Radar. Radar was the 5,000th dog adopted from the SPCA at Petsmart. Submitted Photo

The Pearl River County SPCA hit a major milestone Saturday when it adopted out its 5,000th dog from Petsmart.

SPCA Public Relations manager Maria Diamond said they have been taking pets to the Slidell, La., location of Petsmart since 2000 and before that the Covington, La., Petsmart. Finally, after so many years of having dogs and puppies up for adoption at the stores, 5,000 have been adopted.

“That’s a lot of little lives that have been saved,” Diamond said.

Between eight and 30 adult dogs and puppies are transported to the storefront nearly every Saturday by volunteers, she said. Volunteers set up either outside the store or inside, depending on the weather, and offer adoptions at various prices. Diamond said they always make sure to include several older dogs as well.

A little boy who has never had a dog before, adopted the 5,000th puppy, Diamond said. The puppy was a terrier mix, so it won’t get very big, Diamond said. After the adoption was complete, the boy and his mother were presented with a large gift basket, which included several toys, treats and other goodies. To celebrate, the store managers came out to thank the family, shoot off confetti poppers and take photos, Diamond said.

Volunteer coordinator for Petsmart Connie Freeman, said they have been getting a lot more business since Petsmart moved from its old location off Airport Road to the new Fremaux center. She said when she found out they were about to hit such a big milestone, she was very excited. She said running the adoptions at Petsmart is one of her passions, so she is always excited when finding homes for puppies and adult dogs.

Diamond said they will soon be hitting a milestone with their cat adoptions as well. Unlike the dogs, however, cats are always available onsite at Petsmart.

Volunteers set up a booth at Petsmart with puppies and adult dogs every Saturday from about 11 a.m. to 3 p.m. Freeman said because of the hot weather they are currently located indoors, but are hoping to be able to move back outside again sometime soon.