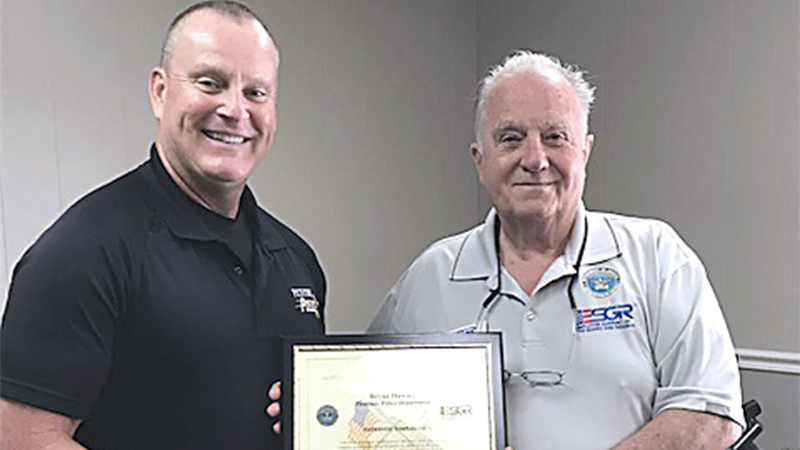 ESGR representative Philip Muller (right) presents Picayune Police Chief Bryan Dawsey with his second Patriot Award. The Patriot Award is given to managers or supervisors who go above and beyond for their military personnel, Muller said. Submitted Photo

Picayune Police Chief Bryan Dawsey was recently presented with another Patriot Award in recognition of his support of the military personnel he employs.

Muller said the Patriot Award is usually not given to a business or entity, but rather to individuals. He said it is awarded to managers or supervisors who play a big part in supporting their employees who are enlisted in the military.

Dawsey said he received his first award in 2015 after being nominated by officer Lawrence Hopkins. This year he was nominated again, this time by officer J.D. Herring. Both Herring and Hopkins are currently deployed overseas and are not expected back until next April or May, Dawsey said.

Both of his nominations came as a surprise, Dawsey said. He said over the years the department has always employed a large number of military personnel, from dispatchers to police officers.

“I fully support the people who serve in our military. I have all the respect in the world for them. They make wonderful officers,” Dawsey said. “They were both surprises, but it’s a great honor and I certainly appreciate it. But, it’s more of an honor to have them working for us.”

Muller said of all of the police departments he has worked with, he was especially impressed by the Picayune department. He said the department seems to put more effort into accommodating military personnel and working around their sometimes hectic schedules than many others.

“The Picayune Police Department seems to be head and shoulders above some of the other departments. They really have their ducks in a row,” Muller said.