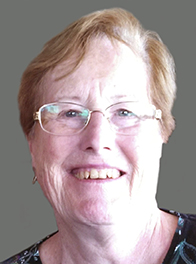 Patricia “Pat” Adams Wagner of Carriere, MS, passed unexpectedly on Sunday, August 5th while she and husband, Russ, were spending the summer at their cottage on Dalhousie Lake in Ontario Canada.  Pat, age 82, was born in Endicott NY to George Adams and Thelma Chrysler Adams.
Pat graduated from Cornell University in 1957 and was employed in hospital and public health laboratories in Ithaca, New York and Augusta, Maine prior to moving to Carriere in 1979 and continuing her scientific career at Stennis Space Center.  In 1988 she earned her MS degree in Computer Science & Statistics from The University of Southern Mississippi while employed conducting research related to marine corrosion and materials science.  In 1998 she retired from oceanography research after spending fifteen years with the Naval Research Laboratory’s Stennis facility.  In retirement, she traveled the world with Russ; they were always planning their next destination.
Surviving are her husband of 62 years, Russell Wagner, and daughters, Susan (Chris) Lyon of suburban Rochester NY and Wendy (John) Cartmill of Herndon VA and four grandchildren, Andrew & Dana Lyon and June & Georgia Cartmill.  Also mourning Pat’s passing are her brother George (Jean) Adams of Tucson AZ and brother-in-law Richard Wagner of Homer NY.
She was preceded in death by her parents and her brother & sister-in-law, Burt and Rachel Adams of Owego NY.
Pat’s family would like to express their sincere gratitude for the outpouring of sympathy and outreach from the Hide-A-Way Lake community.  Friends are invited to a celebration of Pat’s life, Sunday, October 28, 2018 from 2PM until 4PM at the Hide-A-Way Lake Lodge.  The family wishes any memorial gifts in Pat’s memory be donated to the Margaret Reed Crosby Memorial Library.
You Might Like