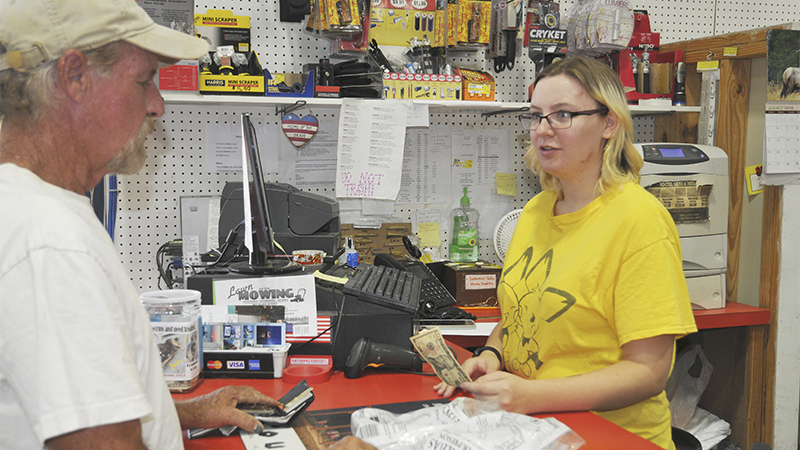 Steve Snider, owner of GNS Construction, makes a purchase at Phillips from Alyssa Mason. Now that the government can charge an internet tax, municipalities around Mississippi are hoping for a cut to put towards infrastructure. Photo by Leah McEwen

The cities of Picayune and Poplarville are both taking part in the Mississippi Municipal League’s effort to convince the State Legislature to agree to divert a percentage of sales taxes collected via Internet sales to local municipalities.

At the Poplarville Board of Aldermen’s Aug. 7 meeting, the Board passed a resolution as part of the Mississippi Municipal League’s “Balance the Scales with Internet Sales” movement to urge the Mississippi Legislature to divert 18.5 percent of Internet sales taxes collected back to local municipalities.

“The city of Poplarville has joined the Mississippi Municipal League and its 292 member municipalities across the state in an effort to support the inclusion of this diversion in any legislation for infrastructure funding that might be considered during a special session,” the Board’s resolution states.

Poplarville Mayor Rossie Creel said the hope is that the funds will be provided to the municipalities so they can use them for things such as infrastructure projects. That funding could help pay for automatic meter readers, improvement of streets and several other important projects, he said. Creel said many small municipalities are struggling to maintain their infrastructure with their current funding, so the extra money would help.

“This revenue needs to be shared with cities and towns. We are the economic engines of this state. If we can improve our infrastructure, the state only stands to gain. The climate for economic development and job creation will be improved and retail should grow, increasing overall sales tax collections for the state,” Creel stated in the resolution.

Picayune Mayor Ed Pinero Jr. said the city of Picayune is also backing the Mississippi Municipal League’s efforts. However, Pinero said no one knows what taxes will be brought in and to what extent. Because of this, Pinero said the city will not be expecting the tax diversions as city leaders work to establish the upcoming fiscal budget.

Creel said he hopes that even if the Legislature doesn’t approve the full 18.5 percent, at least a part of the tax can be diverted to the state’s municipalities.