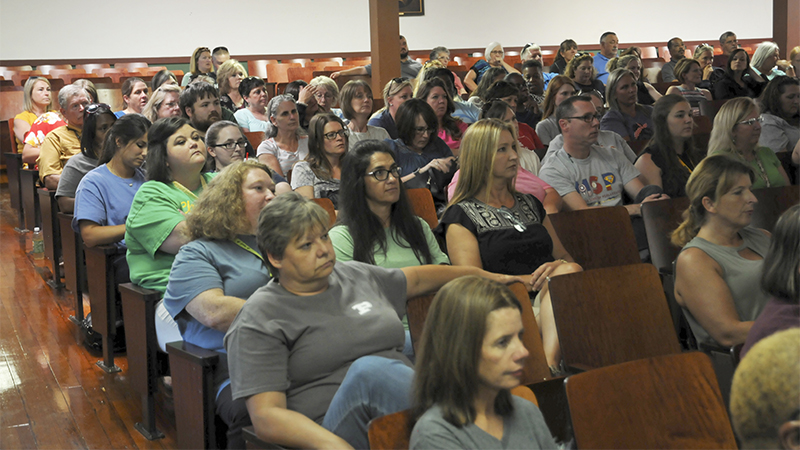 Teachers and faculty district-wide attended the CRASE training at Poplarville Lower Elementary Thursday afternoon. Superintendent Carl Merritt said this training is one of many ways the district is preparing to keep students safe in the upcoming school year. Photo by Leah McEwen

CRASE training prepares civilians to react to a catastrophic attack and teaches steps to minimize the damage done by an attacker. The key is situational awareness and having a plan in place before an event even occurs, previous coverage states.

Poplarville Superintendent Carl Merritt said the District is implementing several new security features, which include staff training, buzz in and buzz out doors and response teams. He said policies have also been put in place to ensure students are safe on buses and when participating in extracurricular activities. He said they have revised a lot of old policies as well.

Picayune Police Major Chad Dorn, who is in charge of the Picayune School District’s security, said three more school resource officers are going to be hired for the upcoming year, providing a school resource officer at every campus in that District. While they will not be in place by the beginning of the school year, Dorn said his hope is that the officers will be hired, trained and stationed by January.

The Picayune School District will also be implementing CRASE training for staff, Dorn said. Throughout the school year, various departments will be trained on how to react to an active attack situation, he said. While faculty is going through training, students will also prepare for attack situations by participating in regular intruder drills. Dorn said these drills help students know how to react if an attack occurs.

“The Intru-Door Security system is in the construction phase and installation will begin as soon as they are completed,” Lumpkin said.

Lumpkin said the Pearl River County School District has its own police force with three officers. For the upcoming year a fourth officer was hired to provide a full time officer at every campus. The campus police also conduct regular crisis management training with faculty to prepare them for active attack events, fires and natural disasters, Lumpkin said.

“We’re entering a time when school security is on the forefront and campuses are more secure. This may be uncomfortable, but we would like to ask our parents and our community to be understanding of the security measures we have in place. It’s a big challenge, because we are trying to keep students safe while also maintaining that open community feeling,” Lumpkin said.