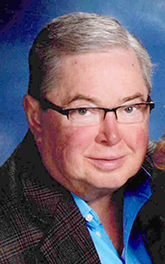 Harry Thomas Thames, age 72 of Gulfport, passed away on August 28, 2018. He was a native of Seminary, MS, graduated from Seminary High School, and almost an AS at William Carey University.

He was preceded in death by his parents, David and Helen Thames; his sister in law, Vivian Thames; and his step grandchild, Reese Elvin Smith.

His hobbies were landscaping, gardening, and woodworking. He was a member of the Masonic Blue Lodge, Shriners, and Joppa Temple, along with several positions in the Baptist work and Fellowship.

Closing Words from Harry: I want to thank my wife, Rita for standing beside me during trying times. Thanks for other friends, loved ones, and family at these times. A special thanks goes to Dr. David Larosa and his staff, and Dr. Paul Mullen and his crew. Thanks to New Hope Baptist Church for the thoughts and prayers. There are many others that have supported, prayed, sent cards, and called. Thanks!

In lieu of flowers, the family requests contributions be made to Gideons International through New Hope Baptist Church.

An online obituary may be viewed and condolences and photos shared at www.riemannfamily.com.