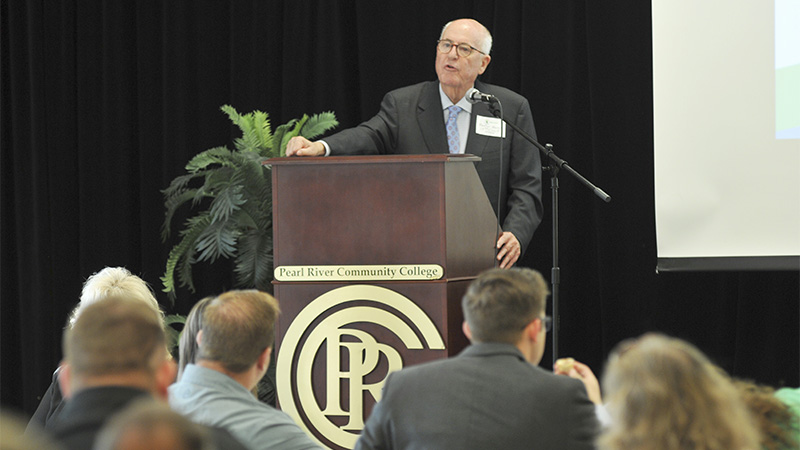 15th District Circuit Court Judge Prentiss Harrell thanked everyone for coming and introduced one of the initiative’s founders, Supreme Court Justice Dawn Beam. He commended Beam for all of the work she has done for the initiative – especially since her work has been on her own time. Photo by Leah McEwen

Lumpkin said the purpose of the Families First Initiative is to keep families together and help parents provide a better environment and quality of life for their children. She said sometimes low-income families need help, but don’t know where to go or who to turn to.

That’s why this initiative was created – to connect those in need with someone who can help, she said.

“We’re honored to be one of the chosen few counties to be a pilot,” Lumpkin said.

Tenth District Chancellor Rhea Sheldon said providing resources to families will help prevent children from being taken into state custody due to neglect. For instance, if a mother doesn’t have a job because she doesn’t have her GED, they would connect her with a program to assist her in receiving that certification, she said. If a child is already in state custody, she said the process to reunite them with their families can be expedited.

“It’s all about connecting the need with the resource,” Sheldon said.

Once everyone arrived to the event, 15th Circuit Court Judge Prentiss Harrell welcomed the attendees and introduced Supreme Court Judge Dawn Beam, who is a founder of the initiative.

Beam said it doesn’t matter how wonderful a foster family is – children want to be with their parents. If families are given the tools they need to be self-sufficient, the number of children in foster care would drop significantly.

Of all of the children in state custody, 82 percent were neglected, Beam said. She used the example of a home losing power due to an electrical malfunction. If an electrician volunteered his time to fix it for free, the family would be better off. As a second example, she described a hypothetical where a child who was without a bed and clean blankets, but a church in town was able to donate those items to the family. Having a bridge in place between those in need and those who can help leads to safe, stable, self-sufficient families, Beam said.

“Healthy families produce healthy children. We have a charge to help the least fortunate among us. We have a moral obligation to do our part,” Beam said.

After Beam’s speech, a few videos were shown and community leaders in the room were given the chance to speak. After the presentation, attendees interested in helping pledged their support for the initiative.

Lumpkin said information on how community members can be involved will be released soon.