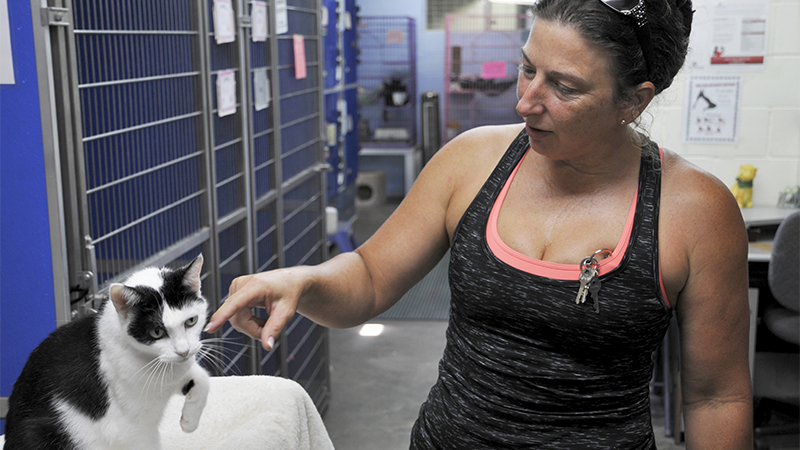 Shelter cat Cordie gets some love from SPCA volunteer Rhonda Furby. Cordie is one of the senior cats that will be available to adopt at no cost. Photo by Leah McEwen

Today the Pearl River County SPCA will be participating in the nation-wide Clear the Shelters Day and will be offering significant pet adoption discounts.

Shelter Director Judy Wheaton said it will be a day of games, where participants can play a ball toss game to determine what they will pay for their adoption fee. Several cups will be placed along the floor – each indicating an adoption price between $10 and $55. Wheaton said participants will toss a ball and will be able to adopt an animal at the discounted rate listed in the cup.

Pet adoptions include spaying/neutering, vaccinations, deworming, a microchip and registration and a free bag of food, among other things. Wheaton said every animal that is available for adoption at a discounted rate through the promotion will have a tag on their cage.

This event coincides with an adoption day at Petsmart in Slidell, Wheaton said. The SPCA has been taking dogs to Petsmart since 2000 and are only three adoptions away from hitting the 5,000 mark. Wheaton said once the shelter hits that 5,000 mark, they will have a celebration. She said she hopes those last three are adopted by Friday, so they can receive that call during the Clear the Shelters event on Saturday.

Cattery Manager Debi Bordecki said the SPCA has been running a half-price promotion for the past few weeks, but only four eligible animals have been adopted. Because so few have been adopted the shelter is still over-capacity and is in desperate need of space, she said.

“We’re hoping a lot of people will come out and take advantage of this event,” Wheaton said.