Best advice on snakes- leave them be 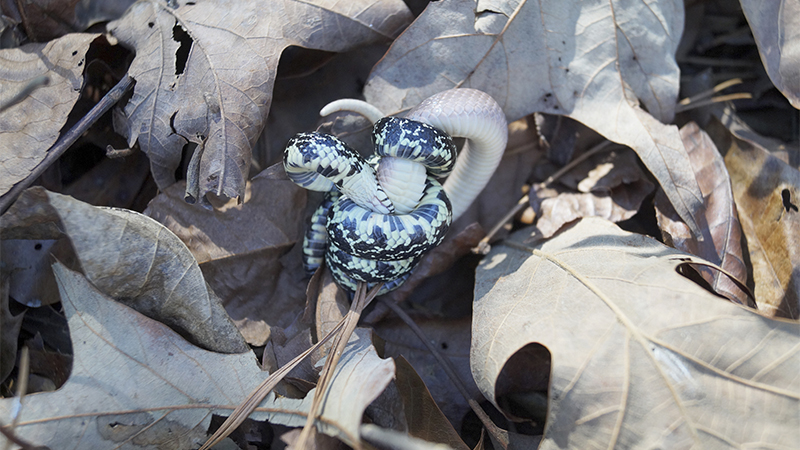 A black speckled king snake eats another snake nearly the same size as itself. Extension Agent Eddie Smith said snakes like the king snake not only keep down the number of pets like rats and mice, but they also eat venomous snakes. Submitted Photo

Pearl River County is home to a number of venomous snakes, so while outdoors it’s a good idea to keep an eye on the ground.

There are several ways to identify whether a snake is venomous or not in the wild, Smith said. For instance, a venomous snake will typically have an elliptical pupil similar to a cat and will have a triangular-shaped head. Picking up on these physical attributes usually requires up-close inspection of the reptile, however, so Smith suggested taking a photo instead and sending it to a local wildlife professional for identification.

Rattlesnakes will almost always use their rattle when a human is nearby, but many blend in with their surroundings, so it is important to watch for them when outdoors. Coral snakes are very rare in Pearl River County but have been found in the area, so Smith said to be cautious.

If an attack does occur, Smith said to seek immediate medical attention. He said it is important to know the exact type of snake that attacked so the hospital staff will know what kind of antivenom to administer. If possible, capture a photo or kill the snake and take it to the hospital for identification, Smith said.

According to an article by the U.S. Forest Service, symptoms of a snakebite may include nausea, vomiting, numbness around the face and/or limbs, labored breathing and disturbed vision. The venom should not be sucked out. The article also advises against applying a tourniquet, putting the wound into water or drinking alcohol or caffeinated drinks.

Smith said that while snakes can be intimidating, most will mind their own business, so leaving them alone is the best bet. Also, snakes are beneficial to the environment by keeping the population of pests such as rats and mice at bay. Some snakes, such as the black speckled king snake, will even eat other snakes – including venomous ones, he said.

“I have a king snake in my back yard. He leaves me alone and I leave him alone because I know he protects my home from pests and protects me from venomous snakes,” Smith said.

Smith said snakes don’t like to be out in the open, so keeping grass cut short is a natural method to deter snakes from the home. He also advised against having objects or structures near the house that snakes could hide under. Keeping pet cats, dogs and geese are also good ways to keep snakes away from the home, he said.