SPCA – number of intakes down, adoptions up 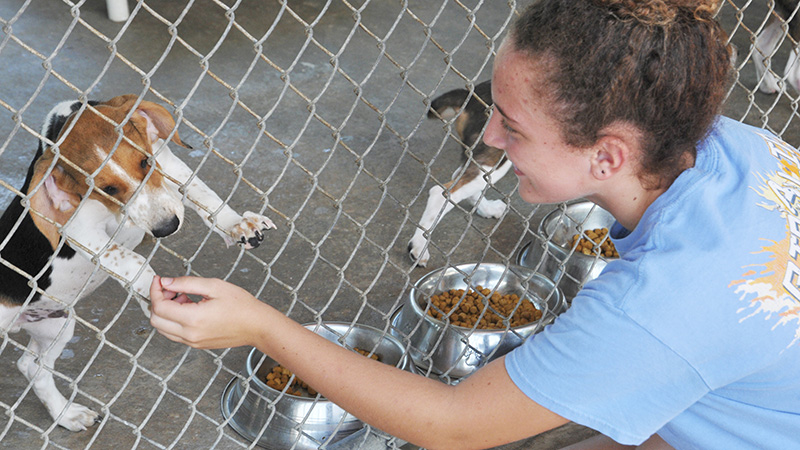 Bailey Craft looks around at all of the Pearl River County SPCA’s puppies, looking for the perfect one to give to a cousin. Photo by Leah McEwen

Between the years 2016 and 2017, the number of animals brought into the Pearl River County SPCA dropped, while the percentage of animals adopted rose.

Although there were less animals brought into the shelter in 2017, the SPCA still adopted out nearly the same number of animals as the year before. There were 56 less puppies adopted and 10 less adult cats adopted, while there were 56 more adult dogs adopted and nine more kittens adopted. By the end of the year, 1,796 animals had been adopted – only one less than the year before. Because of the decrease in surrendered animals, the percent of shelter animals adopted rose by 3.62 percent. In 2017, 67.57 percent of animals taken in by the shelter were adopted out, while only 63.95 percent of the shelter population was adopted out in 2016.

The number of animals that were euthanized also dropped between 2016 and 2017. SPCA Public Relations manager Maria Diamond said that three key things are taken into consideration when deciding whether an animal will have to be euthanized upon intake. These include whether the animal has an adoptable personality, whether they are healthy and free of serious injuries and whether the shelter has enough space to bring in more animals. If an animal does not match up with these three criteria, shelter staff are often forced to euthanize it.

Diamond said once an animal has been cleared for adoption, they are spayed or neutered and given a place to stay until they find a home. She said once the operation has been completed, the SPCA typically keeps them for however long is necessary for them to be adopted.

Diamond said since animals can easily get depressed if they are left at the shelter for too long, the SPCA tries to move them around on occasion, and will often take cats to stores such as PetSmart in Slidell and PetSense in Picayune. The SPCA also tries to place as many animals in foster homes as possible so animals can be in a better environment while they are waiting for adoption. This often lowers the number of young animals that catch illnesses while they are at the shelter like upper respiratory disease.

The price for adoption directly reflects the cost that goes into having an animal prepared to go to its new home, Diamond said. She said that since the PRC SPCA does not have a veterinarian on staff, it has to pay for outside help, which raises adoption prices. However, she said if an animal is not adopted quickly, the shelter will typically lower its adoption fee. For instance, after three months the adoption fee may be cut in half, and a few months after that it may go down to $20.

Because the shelter is currently over-capacity, Diamond encouraged those who need to surrender their animal to call the shelter ahead of time and make an appointment. This way, the shelter can try to find additional fosters and make room. If an animal is brought in without an appointment and there is no room, the shelter may have to euthanize the surrendered animal.