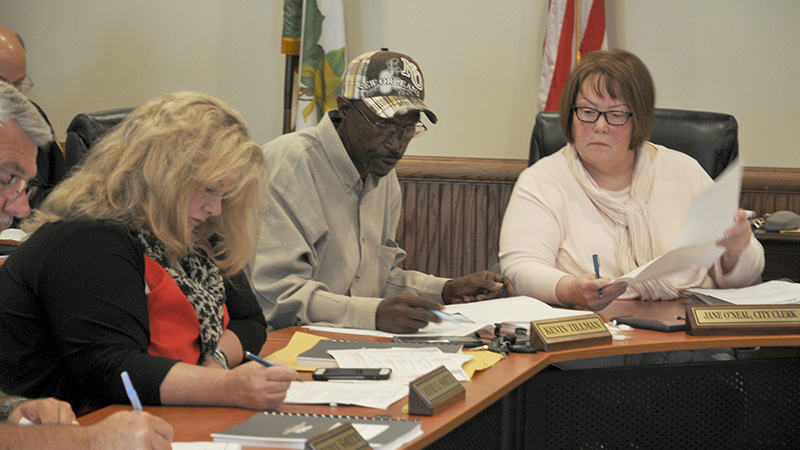 FOR REVIEW: Alderman Kevin Tillman, center, reviews documents covering a delay in the construction of the new City Square Park and how long of an extension will be granted to the development company to finish the job. Photo by Leah McEwen

Engineer Jason Lamb brought a change order from Stewart Development to the Board requesting permission to paint and prime the plywood in the new Public Works Facility’s shop room. The cost would be approximately $1,990 to paint and prime the wood. He said the work will protect the wood from rotting in case the walls got wet. During the previous Board meeting, Lamb said they may be able to wait until the end of the project to address the problem, but at Tuesday’s meeting Lamb said he was informed by the company that the plywood would need to be installed next week.

The Board approved a motion allowing Stewart Development to prime and paint the plywood at a cost of $1,990.

Lamb then gave an update on the Public Works Facility’s progress. He said that crews are on task to be finished by the deadline in September. He said the main issues that have arisen concern storm water management.

He said he is encouraging workers to finish the storm drains.

“If and when it rains it’s really heavy,” Alderwoman Shirley Wiltshire said.

He said there have also recently been deficiencies with the building’s carpentry – some due to poor workmanship and some due to miscommunication. However, those issues have been corrected and workers are now back on track. Gas and electricity should be in the building within the next 2-3 weeks, he said.

While the Public Works Facility is on track, the new City Square Park is unfortunately behind schedule, Lamb said. On paper, the job is only 30 percent complete. The contractual deadline is July 21.

A variety of issues have pushed development back – including eight days of work that could not be completed due to bad weather conditions. He said the electrical conduit took more time than expected, and the interior island had to be raised by 10 inches. Additionally, several density tests failed on the sidewalks and parking lots, which pushed construction back even further.

The construction company requested the Board consider granting them 17 additional days to complete the project.

Lamb said he anticipated the company making headway in the next few days, but still suggested allotting them more than 17 days to complete the project.

Lamb said if the Board gave them 30 to 45 additional days, they would be able to complete the project without making another extension request.

He said that even if the company is given an extension, they are still likely to finish as quickly as possible, since they have other contracts to begin in the near future.

“The elements of construction can be tough, and it has proven itself to be tougher than we anticipated. Mother Nature has provided eight days of frustration,” Lamb said.

The Board approved extending the deadline to September 1.

For more on Tuesday’s meeting, see Thursday’s edition of the Item