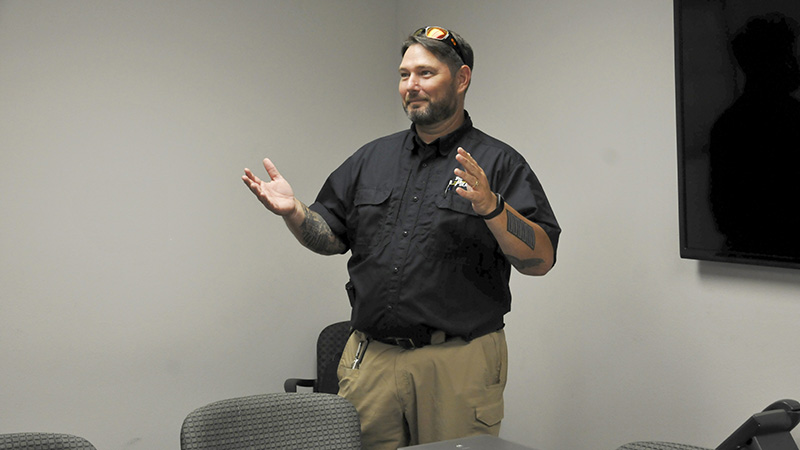 There are several things a civilian can do if someone attempts to attack a group of people, a business or a residence, Dorn said. With the number of large-scale violent attacks on the rise across the United States most involve an active shooter or some other violent attack. Between 2000 and 2016, 242 people were killed in one of these incidents.

Dorn said that while it is difficult to pinpoint a particular type of person who would be an active shooter, the majority in the past have been men. He said many broadcast their intentions before conducting their attack. There are several specific risk-factors behind many of these attacker’s actions, such as a history of violence, exposure to violence, substance abuse, mental illness, a history of isolation and a negative family dynamic, among other things, Dorn said.

During an attack, the number of deaths correlate to two things – how quickly the police can arrive, and the concentration of victims. Dorn said the average response time for Picayune police officers is five minutes. While waiting for the police to arrive, it is important to know exactly how to respond to an attack, Dorn said.

First, know where all of the exits are and have an escape route planned before an attack even occurs, Dorn said.

During an attack, Dorn said victims will undergo three stages of response: denial, deliberation and the decisive moment.

When a gunshot is heard, Dorn said people go into the first stage of denial by convincing themselves there is nothing to worry about. Dorn said denial can be a dangerous mindset, because it can limit a person’s response time and can lead to freezing up.

“It’s never a good idea to freeze. You’re either going to fight, or you’re going to get out of here,” Dorn said.

After accepting something is happening, deliberation leads to taking action. Dorn said stress and a high heart rate can cause people to lose fine motor skills, so it is important to breathe and stay calm. Next, make a mindset shift from, “I’m going to die,” to, “How do I get out of here?” Having an escape plan will help reduce the need for critical decision making, Dorn said.

There are three main ways to react to an active attack event – avoid and run, deny access and hide or defend and fight. Dorn said playing dead is almost never a good idea, because it leaves the victim vulnerable to hostile actions.

Dorn said a person’s first response should be to get out as quickly as possible by being aware of surroundings and exits.

If escape is impossible, deny the attacker access by locking the door, turning out the lights and getting out of sight. If possible, barricade the door with heavy objects, the heavier the better. Even simple doorstops can slow an attacker. If a door opens outward, a rope or belt can be used to create tension by pulling the door shut a safe distance from the door.

If hiding does not work, the last option is to fight. Dorn said a anything can be used as a weapon. Working as a team and using the element of surprise can catch the attacker off-guard.

Once victims have escaped they should call 911.

When police arrive, Dorn said people need to follow all commands, show their palms, and resist the urge to move. A responding officer’s focus will be to stop the attacker, who is typically unidentified when they arrive. EMS personnel will have to wait until the building is cleared before they can respond, so knowing CPR and basic first aid may save someone’s life before medical help arrives, Dorn said.

Dorn said the presentation is offered free through the Picayune Police Department to businesses, churches, or any other organization.