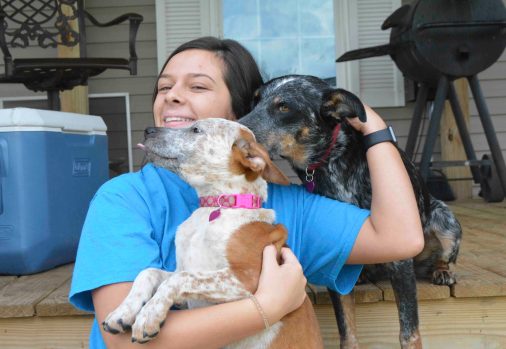 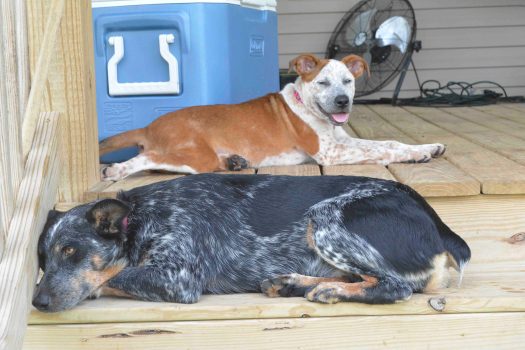 Mellie has been returned to her mother, Stella, and owner Gabbie Goss.

That was the case with an unexpected litter of puppies that, through a series of events, would end up filling a void left by the death of a beloved pet.

Just after she and her husband married, they decided to adopt a dog named Riggins, a 4 ½ year-old pitbull bulldog mix. In the following years, they raised the canine like he was their own child.

A year and a half ago, the family decided to add to their family by adopting Stella, a Buhler Australian Shepherd, Goss said.

“They both fell in love instantly and I had to fight to keep them apart,” she said.

Despite her attempt to keep the dogs from breeding because Stella had not been spayed, Stella gave birth to 10 puppies earlier this year, Goss said.

With no more room in the household for pets besides Riggins and Stella, the couple decided to give away the surviving nine puppies once they were weaned, reaching out to people they knew and trusted who could provide a good home.

Earlier this month the couple returned from a cruise only to find out the unfortunate news that Riggins had passed away.

“He was our child and I was devastated,” Goss said.

Two nights after learning of the death of their pet, Goss said she was awakened by a dream that the Pearl River County SPCA currently had a dog similar to Riggins available for adoption.

Anxious, she got on the SPCA’s Facebook page and scrolled through the pictures to put her suspicion to rest.

Several pictures later Goss stopped on the picture of a puppy, now named Mellie, that she instantly recognized as one of the puppies she had given to a family.

“I looked up her four given week-old picture from when I had her and she had the same markings… tail was red, black and white,” Goss said.

She went to the shelter to look at the dogs available for adoption and instantly found the dog she had seen on the Facebook page. Without hesitating, she adopted Riggins’ offspring.

Initially she was upset the family had given the puppy up to the shelter instead of returning her to Goss.

But that was soon forgotten, especially when Stella immediately recognized Mellie as one of her own puppies, Goss said.

“I’m so glad I have her back. She’s the only thing I have left of Riggins,” she said.