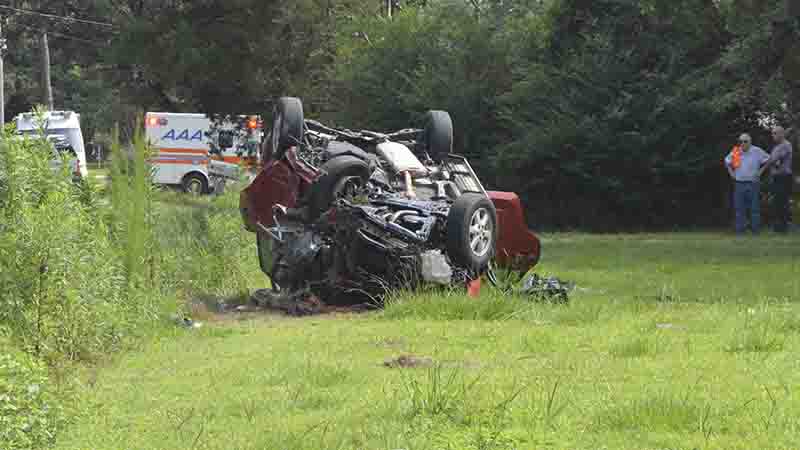 OVERTURNED: This Toyota RAV4 collided with a Nissan Altima Wednesday afternoon on Ceasar Road. The occupants of the Toyota were transported to Forrest General Hospital in Hattiesburg for treatment of serious injuries. The driver of the Nissan was pronounced dead at the scene. Photo by Mrudvi Bakshi

Wednesday afternoon the Pearl River County Sheriff’s Department responded to a two-vehicle accident at the 800 block of Ceasar Road that resulted in a fatality.

Deputies and investigators with the Sheriff’s Department were dispatched to the scene of the accident at 2:33 p.m. Investigation into the accident determined two vehicles, a 2007 Toyota RAV4 and a 2015 Nissan Altima, were involved, Capt. Joe Quave, said.

The Toyota, driven by 19-year-old Sarah Hicks, was southbound on Ceasar Road when it collided with the northbound Nissan. A juvenile passenger was in the Toyota at the time of the accident, Quave said.

Law enforcement officials and emergency medical personnel later determined the driver of the Nissan had died as a result of injuries sustained in the accident.

Hicks and the juvenile passenger sustained serious injuries during the collision and were transported to Forrest General Hospital, Quave said.

The identity of the deceased will be released after next of kin has been notified.  Quave said the cause of the accident is still under investigation.