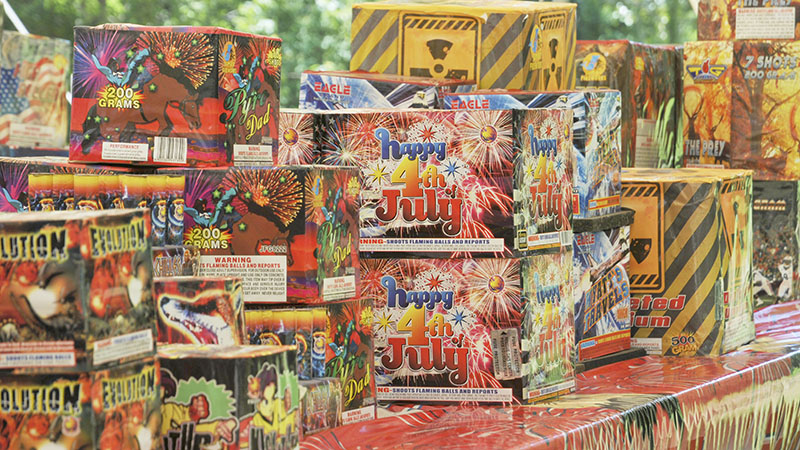 While fireworks can be a fun addition to next week’s July 4 celebration, be sure to use them with care to avoid injuries and fire. Photo by Leah McEwen

Fireworks are a traditional part of almost any 4th of July celebration. During the month of June, brightly colored fireworks stands open up shop featuring tables filled with a variety of small explosive devices. While they can be fun, fireworks can be dangerous and also pose a fire hazard. Because of this, steps should be taken to ensure everyone’s safety this Independence Day.

“First off, make sure whoever is doing them is sober. If there are children, make sure they’re closely supervised by an adult,” he said.

Weaver said that those who will be lighting the fireworks should wear eye protection and spectators should stand at a safe distance away from where the fireworks are being lit. Fireworks should not be kept in the pockets of clothing. Before lighting the devices, be sure to place a hose or other source of water nearby. Weaver said that if a firework does not light, leave it alone for a while before throwing it into a bucket of water. Never try to relight a dud.

According to an article by the National Safety Council, the number of fires increases on July 4; two out of every five fires that day are caused by fireworks, the article states.

“Each year, fireworks cause an average of 1,300 structure fires, 300 vehicle fires and nearly 17,000 other fires resulting in thousands of injuries,” the article states.

Weaver said residents can prevent a fire from being caused by fireworks by aiming them away from buildings and other structures that may be combustible. In addition, he said it’s important to never throw fireworks at people or aim them at anyone.

Weaver said children should be extra careful when using sparklers. He said sparklers can burn at up to 2,000 degrees. Each year sparklers account for a fourth of all injuries – especially among children, Weaver said. While he doesn’t recommend allowing children to use sparklers, if they do, they should be supervised at all times.

Several other fireworks can cause severe injuries if used improperly. According to the NSC article, bottle rockets commonly cause eye injuries while Roman candles can lead to severe burns and finger loss.

In Picayune, fireworks can be used within the city limits between June 15 and July 5, Weaver said. He said it is illegal to use them before or after those dates until New Year’s comes around.

In Poplarville, there is a city ordinance prohibiting the use of fireworks within the city limits, City Clerk Jane O’Neal said via text correspondence. This includes July 4 and the surrounding dates.

Goodwill to have new location