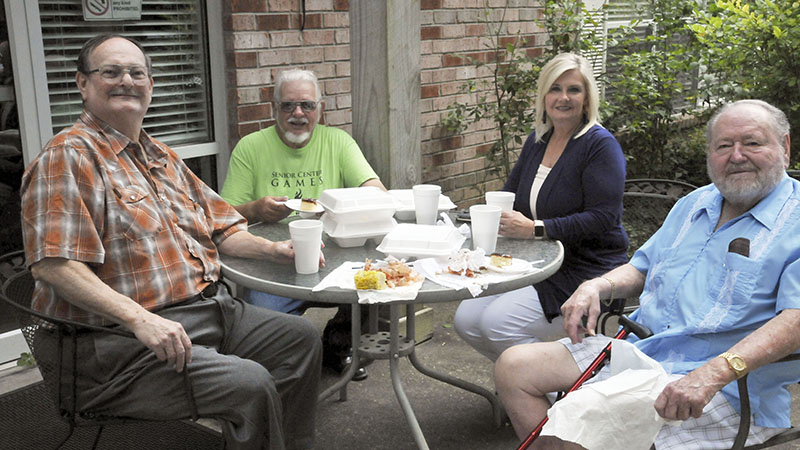 Hundreds of senior citizens and their families filled the banquet room at the Senior Center, enjoying fresh boiled shrimp, corn and potatoes.

Vice President of Operations at St. Joseph Hospice Mark Crowson said this was the largest turnout they’ve had at the shrimp boil. He said they started holding the event four years ago. That first event brought in about 60 attendees. This year there were over 250.

Crowson said the purpose of the shrimp boil is not to make money or get business, but rather to do something nice for the community while taking the opportunity to tell senior citizens about different medical resources. He said a lot of people don’t know about the resources available, so they want to bring that information to the public. By doing this, Crowson said he hopes they can raise the quality of life for seniors in need.

“Honestly, it puts a smile on my face to see their smiles,” Crowson said.

He said that when he was younger, children were more likely to live close to their parents or grandparents, so people didn’t have to worry as much about finding care in old age.

Now, however, people move far away to find work leaving elderly adults alone. Crowson said he wants to challenge other medical institutions to follow their example and start giving back to the community without expecting anything in return.

“We love what we do,” Crowson said.

Crowson said St. Joseph Hospice hosts 20 to 25 shrimp boils every year at senior centers across the South. He said the events are held in Mississippi, Louisiana, Alabama and Texas and are run primarily by volunteers.

Russel Foster said this was his second year attending the shrimp boil, and that he enjoyed everything. He said the shrimp was cooked perfectly and the potatoes and corn were delicious.