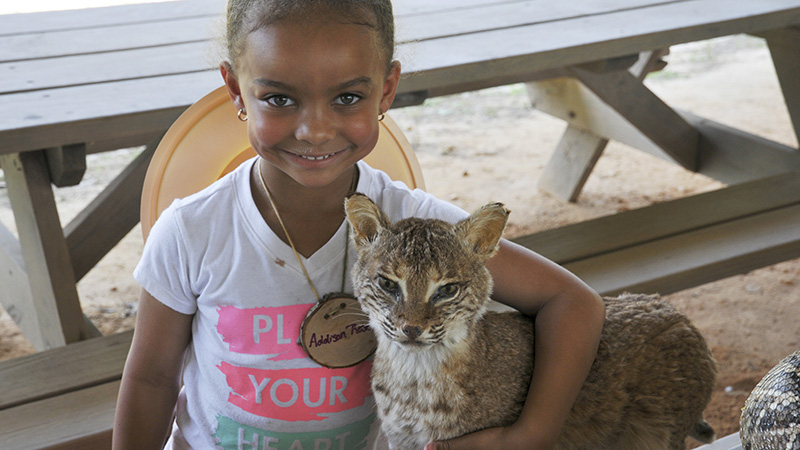 Addison McPhail said she learned a lot about animals at the Forestry and Wildlife day. “Cows make really big noises when they walk and when they moo,” she said. Photo by Leah McEwen

The event was a day of free activities and demonstrations from various wildlife agencies to teach children and their families about nature. Presentations were given by Jamie Pope from Wild at Heart who spoke about wildlife rehabilitation, Dr. Glenn Hughes with the MSU Extension service who talked about “wood magic,” and Bob Rouse spoke about Pineywoods Cattle and their role in the environment. In addition to the speakers, the event included a wagon ride, a prescribed burn and a free lunch.

Joseph Pettigrew, a board member of the Hancock/Harrison County Forestry and Wildlife Association said the Association typically holds four events each year to educate the public. Topics can include wildlife, forestry, birding and more. Saturday’s event was the first that specifically focused on families and children. He said a total of 50 people attended the event, which exceeded his expectations.

“We hope for the most. The more the better,” he said.

Pettigrew said the Association is a grassroots member of the Mississippi Forestry Association and works to promote forestry and wildlife and increase education.

“The kids love it,” Pettigrew said.

One of the most popular displays among the children was Lulu, a live Pineywoods cow. Her owner, Rouse, brought a large bag of food so the children could feed her.

Rouse said Pineywoods cattle are a big part of the local ecosystem. Back when they were introduced to the area by Spanish settlers, they naturally took to the pine forests nearby. He said they were traditionally used for beef, milk and to haul timber, but their grazing also promotes healthy pine forests.

“The role of fire is well understood, but the role of grazing has been forgotten, so it’s being rediscovered,” Rouse said.

Rouse said these cows, while once widely bred in the area, began to decline until less than 500 were in existence. Today, members of the Piney Woods Cattle Registry and Breeders Association work hard to increase awareness. Over the past few years, membership in the Association has increased and there are now over 2,000 cattle on the registry, Rouse said.

He said educating younger generations will help these cattle make a comeback.

“We don’t have a lot of children who show interest in this anymore,” Pineywoods Cattle owner Jim Currie said.