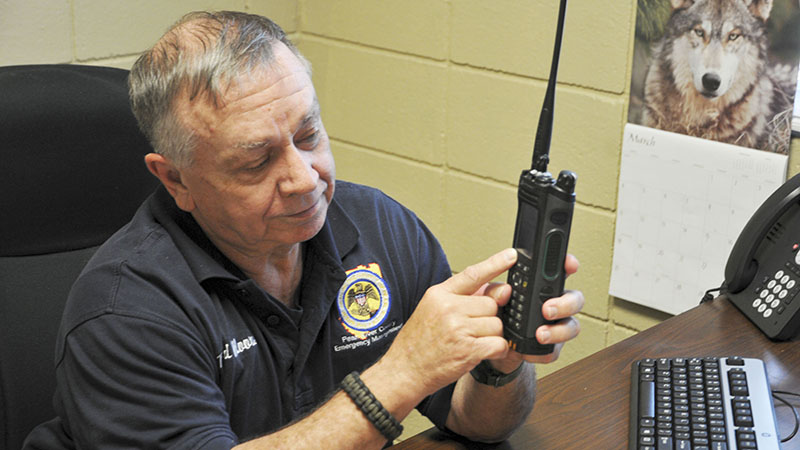 In 2005 Hurricane Katrina caused a wide-scale communications outage across the Gulf Coast. Citizens and emergency personnel alike were unable to contact each other. This led to inadequate rescue and relief operations during and after the storm.

Since then, government agencies on a federal, state and local level have worked to ensure that emergency personnel would not be left in the dark should another major disaster strike the area.

Moore said most people are dependent on their cellphones. However, he said the reality is most towers only have five channels to handle all of the cell traffic in the area. Moore said that said if another major disaster struck the area, nearly everyone would try to make calls, which would overload the system. While there are ways for emergency personnel to get a call out, he said cellphones are still unreliable in case of an emergency.

Rather than rely on cellphones, Moore said all government agencies in Pearl River County have radios managed by the Mississippi Wireless Information Network. These 700-megahertz radio systems are managed on a state-level and provide a communication network between the various agencies in neighboring jurisdictions. Moore said with the simple change of a channel on that system, he could speak to someone in Jackson, Biloxi and beyond.

The MSWIN’s purpose is to, “Get the right information to the right people, in the right place, at the right time. With this objective in mind, the MSWIN system is a robust architecture with disaster recovery features that will provide reliable communications under extreme conditions such as hurricanes, ice storms and floods,” the MSWIN website states.

Moore said that since the radio system is run by the state, the only investment the county had to make was the purchase of radios. He said this system is a lifeline for the county should a major disaster occur.

“If there is a failure in the MSWIN system, things have gotten bad,” Moore said.

While unlikely, if a failure does occur, Moore said there is yet another level of communication the county could fall back on. Using amateur radios would allow emergency personnel to send out emails without regular use of the Internet. He said this system is slow and cumbersome and takes a lot of effort to make it work right – but it would still be possible to reach outside agencies with the system.

Moore said since Katrina, most government entities from a national to a local level have invested a great deal of money to ensure the same communications outage doesn’t happen again.

“I think we’re in a lot better shape than we were in Katrina for an event like Katrina,” Moore said.