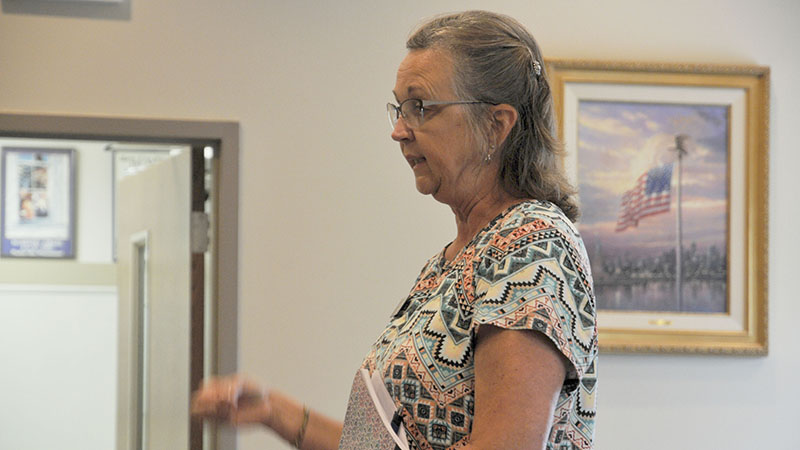 AWARENESS: Melinda Carli from Solace Hospice came before the Board of Aldermen to request use of City Park amenities in November to hold a Walk for Alzheimer’s awareness benefit. The event was approved as long as proof of liability insurance is submitted. Photo by Leah McEwen

After the routine business was handled, Poplarville’s Board of Aldermen approved a proclamation to designate the week of October 1 through October 7 as World War 1 remembrance week. This year marks the 100-year anniversary of the end of the war.

Local resident Charlie Schmitz came before the Board to say that he is concerned that no efforts are being made to remember WWI.

“It’s not a joyous celebration. It’s a remembrance,” Schmitz said.

Schmitz said during the first week of October, several events are being planned to recognize the centennial. He said he is working with the local high schools to hold an essay contest, and he has spoken with a professor from the University of Southern Mississippi about providing a presentation. He said he also hopes a small military parade will be held in Poplarville. Schmitz said there will likely be an event every day of that week as part of the anniversary.

Mayor Rossie Creel asked Schmitz to come back to the Board closer to time to discuss the plans in more detail.

In other business, Melinda Carli from Solace Hospice requested authorization to hold an Alzheimer’s benefit awareness walk. She said that November is National Hospice Month as well as National Alzheimer’s Month. She said most of the local Hospice’s patients have Alzheimer’s or dementia, so it is important to raise awareness.

The event would take place on November 10 at the City Park’s pavilion and gazebo. She said the money raised will go to the Mississippi Alzheimer’s Association. She requested the city authorize use of the City Park’s amenities and that the related fees be waived.

A motion was passed to allow the event to take place contingent on a proof of liability insurance being provided. It was unclear if the Board waived the fees.

A motion was passed to accept the bid from Warren & Warren Asphalt Paving, LLC totaling $13,154.90.