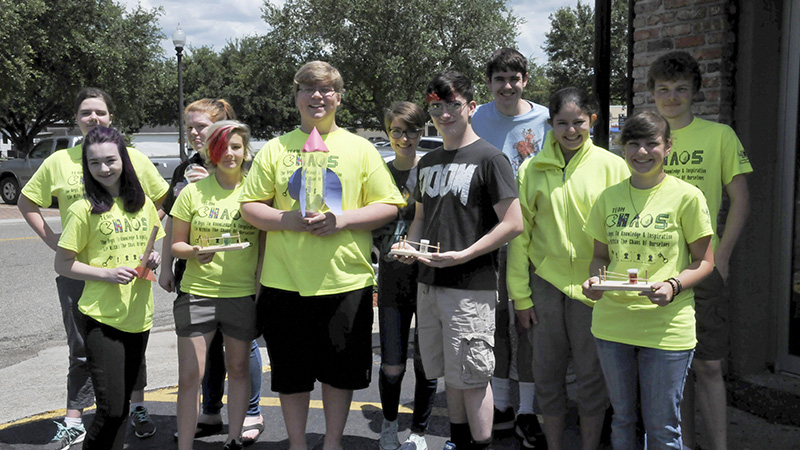 From left, (back) Maggie Lavigne, Kailey Travis, Jessica Helgerson, Jack Hays, Joshua Comeaux, (front) Cady Galloway, Kaitlyn Harrison, Kolby Balch, Noah Pittman, Theresa Hays and Kayleigh Strouse show examples of the rockets and Newton’s cars that will be used to teach students who attend Camp CHAOS. Team CHAOS made it to the semifinal round of the FIRST World Championship in Houston, Texas before being knocked out of the competition. Photo by Leah McEwen.

The Pearl River County Robotics Team 1421,Team CHAOS, made it to the semifinal round of the FIRST robotics world championship in Houston, Texas before being knocked out of the running for the title.

Team CHAOS mentor Karen Balch said before qualifying for the world championship, the team competed in two regional events, one in Florida and one in Louisiana. The team won the Bayou Regional in Louisiana, giving them the opportunity to compete in Houston.

“They had earned the right to be there all year long. Their competitive spirit was very positive. They all had a great attitude,” Balch said.

The competition was based on a retro video game and involved having the robot pick up cubes and drop them on a switch or scale. The switch was placed low to the ground. The scale was placed about six feet above the field, making it more difficult to reach for a lot of the robots, Balch said. As more blocks were added, the scale and switch would move under the weight. As a result, whichever moved blocks the fastest and most efficiently to tip the scale and switch gained more points, Balch said.

Between the Bayou Regional and the world competition, Balch said the team put in a lot of effort to upgrade their robot. She said they decided to work on autonomous programming, which means the robot operated off of pre-programmed commands to complete additional tasks on the field without human interaction to earn extra points. She said the team decided this would be the best use of their time and it ended up giving them a big advantage in the competition.

Team mentor Andrew Williams stated in a release, “I’m always impressed with the level of ingenuity that goes into the robot each year. With limited resources and workspace, it’s always a challenge to produce a high-performing robot, but the team consistently continues to do just that.”

By the end of the world competition, Team CHAOS was in the top six percent of the FIRST teams that attended.

Primary election to be held on June 5