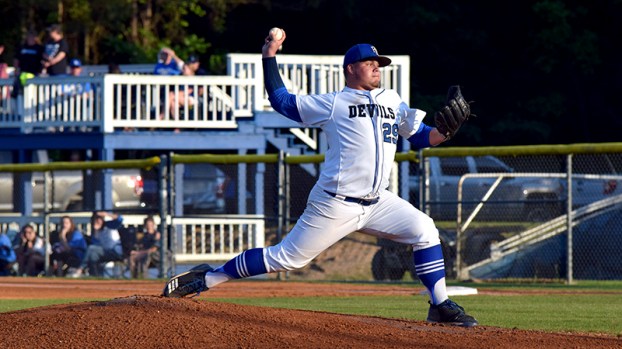 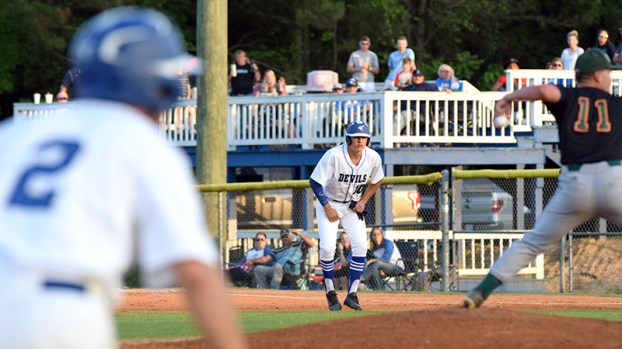 STAY OR STEAL: Robert Shoemake looks at the mound and decides whether to stay at first or steal second during game two against West Harrison Saturday afternoon. Photo by Victor Tun 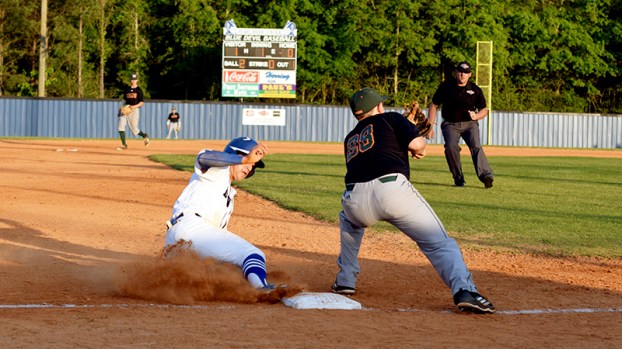 CARRIERE — Pearl River Central’s baseball team advanced to the third round of the Class 5A state playoffs after sweeping West Harrison 2-0 in a best two-out-of-three series.

PRC will face West Jones (25-2) in the third round of the Class 5A state playoffs. Game one will take place at West Jones on Thursday and game two will be at Carriere on Friday. If needed, PRC will travel to West Jones for game three on Saturday.

“You have to give credit to West Harrison tonight because even though they got down early, they continued to battle,” PRC Head Baseball Coach Neil Walther said. “We’re going to see good pitching from West Jones in the next round and just like any other game, the game will come down to our execution on both sides of the ball. I have confidence in our pitchers and batters that we can get the job done.”

Friday night, the Blue Devils (22-6) rallied from behind twice to earn a 4-2 win in game one of the series. West Harrison led 1-0 after the first inning but a homerun by PRC’s Eli Lee to right field in the top of the second tied the game. During the bottom of the inning, the Hurricanes took the lead back after a homerun by Kasey Donaldson. During the sixth inning, Hayden Dunhurst scored the tying run after Zach Roussell was walked to base. One inning later, with Caleb Tynes on base, Dunhurst batted a two-run homerun and secured the victory for the Blue Devils.

Lee and Dunhurst each batted 1-for-2, with one homerun each. Dunhurst finished with two RBIs. On the mound, Rigell Robinson pitched 6 2/3 innings, during which he allowed two hits and struck out 11 batters.

Saturday night in Carriere, the Blue Devils came away with a 7-4 win to seal the series sweep.

In the top of the first inning, Noah Hoffman gave West Harrison an early 1-0 lead after Kasey Donaldson batted the ball into left field. But during the bottom of the inning, Austen Izzio tied the game for PRC after Caleb Tynes was walked to base after getting hit on the side of the arm. One batter later, a hit to center field by Zach Roussell brought Dunhurst home. Moments later, Lee also scored for the Blue Devils off an RBI by Mason Treat. Before the end of the inning, Tynes added one more to the scoreboard for PRC off an RBI by Robert Shoemake. At the end of the first, PRC led 4-1.

During the bottom of the second inning, Izzio and Dunhurst scored one run each to give the Blue Devils a 6-1 lead. But in the top of the third, Tate Parker and Donaldson scored for West Harrison (16-13) and cut the team’s deficit to a 6-3 score. In the top of the sixth inning, with the bases loaded, Taylor Woodcock scored for the Hurricanes after Lawson Capers was walked to first. The inning came to an end when Blake Craft struck out Nathan VanNorman. A wild pitch by West Harrison’s Donaldson in the bottom of the sixth allowed Tynes to score the last run of the game for PRC.

For the Blue Devils, Roussell, Treat and Tynes each batted 1-for-2, Izzio was 2-for-3 and Lee and Dunhurst each went 1-for-3. PRC combined for six RBIs. On the mound, Austin Dean pitched for 5 2/3 innings and Craft played for 1 1/3 innings.

“Tynes, Schlottmann and Izzio made some outstanding plays on defense that prevented West Harrison from scoring more runs,” Walther said. “We have three more days of practice that we’re excited about and I hope we can improve a little bit during that time. Tonight’s win was a result of a great effort from everyone in the team.”

Poplarville baseball: Poplarville’s baseball team saw its season come to an end Saturday night losing 9-5 against Vancleave in game two of the team’s series. The Hornets finished the season with an 11-15 overall record.

Friday night, in game one of the series, the Hornets lost 6-1 against the Bulldogs on the road.

Saturday night, Vancleave led 5-2 after four innings of play. The Bulldogs added four more runs in the top of the sixth to increase its lead 9-2. With one last chance to tie the game in the bottom of the seventh, the Hornets scored three runs but it was too little, too late.