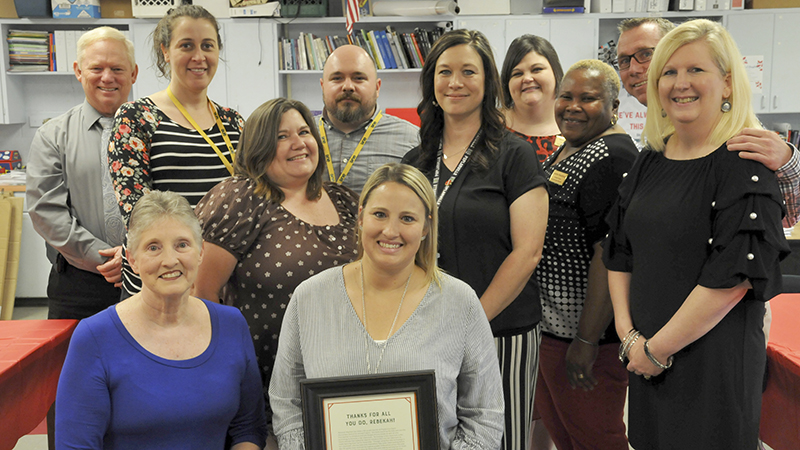 On Monday, Poplarville Upper Elementary teacher Rebekah Mayfield was thrown a surprise party by her coworkers and a team from McAlister’s Deli after winning McAlister’s “Most Deserving Teacher” contest.

Mayfield’s mother, Christy Wegmann said she entered Mayfield into the contest after hearing the extraordinary things she does for her students. A few weeks later, Wegmann was informed that Mayfield had won, and that a team from the restaurant chain would throw her a luncheon at the school and present her with a $250 Visa gift card. Mayfield was chosen out of more than 7,000 entries.

“She deserves to be recognized – she’s really a great teacher,” Wegmann said.

Poplarville Upper Elementary School principal Lynn Payne said he and Wegmann worked hard to keep the secret from Mayfield. Instead of telling her, Payne said he found substitutes for all of the 5th grade classes so Mayfield’s coworkers could surprise her.

Payne told each of Mayfield’s coworkers about the event just before it was time to go in, so no one would give away the surprise. When Mayfield walked through the door and saw her mother and coworkers waiting, she was shocked. Mayfield was given a framed copy of the original proposal that her mother had written along with the gift card from the Wiggins McAlister’s team.

Mayfield has been a 5th grade teacher at Poplarville Upper Elementary for five years. Mayfield said after she went to a Google conference, she decided to talk to the school about introducing Google Chromebooks to her class. The school agreed and bought devices for each of her students.

With the Chromebook, she has been able to get students more involved with reading and writing in a very interactive way. Mayfield can use her own Chromebook to log into her students’ devices to see what each student is doing, allowing her to monitor their productivity digitally. Students’ parents can also log on and see what their children are doing on the devices.

“She has had parents tell her that their child did not like to read until they started using the Google Chromebooks, and now, they love to read,” Wegmann said.

Mayfield has also introduced virtual reality headsets to her classroom so students can take virtual “field trips” to foreign countries.

She and a colleague have been presenters at two tech conferences to illustrate how this technology can be incorporated into an elementary school setting. She said these conferences usually focus on high school and college level instruction, so she is happy she’s had the chance to be a spokesman for elementary education.

Mayfield recently accepted a position at Poplarville High School teaching English, so this will be her last year at the elementary school. Mayfield said she is already looking into ways to incorporate Google Chromebooks and virtual reality into her new class.