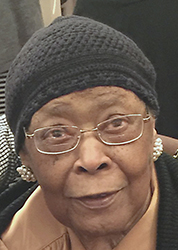 Mother Lou Ella Lather departed this life at her home in Picayune, Mississippi on May 8th, 2018.  Lou Ella “Dear” Lather was born October 4, 1922 in Laurel, Mississippi to the late Mrs. Lucy Mae Anderson McCarty. The family relocated to Picayune when she was 4 years old and connected with the First Church of God in Christ during its formative years in 1926. She received the Lord as her personal Savior later and remained faithful until her death.

Mrs. Lou Ella Lather was one of the first graduates of the then newly appointed principle, J. P. Johnson of the Picayune School District for people of color. She and Lula Mae Brown graduated in 1944 with honors of Salutatorian and Valedictorian respectively. She attended Jackson State College briefly.

Mother Lou Ella (“Dear”) Lather lived her life and was known by her acquaintances as a woman of peace, virtue, skills, care and concern for others, organization and faithfulness. This allowed her to serve virtuously in her church effectively as: Sunday school class teacher for both juniors and later adult women, member of the mothers’ board,  Apollos Ministry (inreach/outreach services) church administrative secretary for 17 years and was the longest surviving member until her death.

She also leaves to mourn a very special stepson, Troy Jordan of Lafayette, Louisiana as well as Vernell Brown of Slidell, Louisiana. She was very proud of her 23 grandchildren; two step grandchildren, 21 great-grandchildren and eight great-great grandchildren.  She held a special place in her heart for her 60-years of friendship with Mrs. Cora Mae Hinton of Picayune. She loved her Pastor, Elder David Simmons and Church Family and her many friends and loved ones.