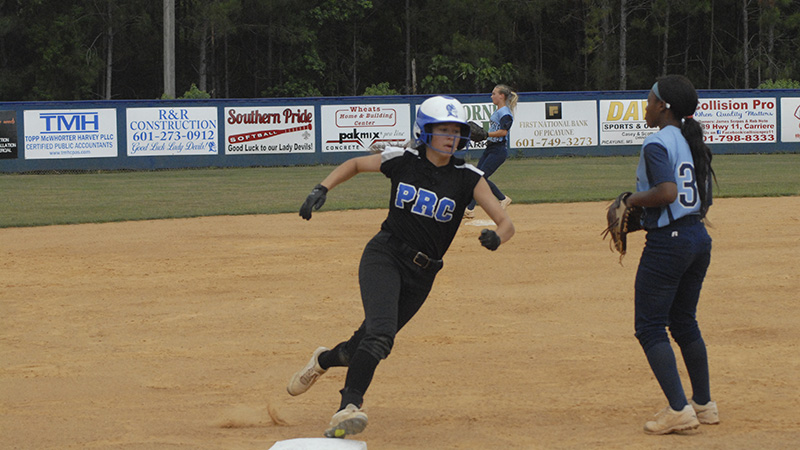 TO HOME PLATE: Pearl River Central’s Taylor Kauzlarich rounds third and heads to the plate on Jade Latham’s RBI single in the first inning of the second game of the series. Photo by Chris Kinkaid. Daily News

For the first time in Pearl River Central High School’s recent softball program history, the Lady Blue Devils is the Class 5A South State Champion after a thrilling 4-3 victory over North Pike in the deciding game in the best-of-three Saturday at the Pearl River Central Sports Complex.

The series was tied at a game apiece after the Lady Devils won the opener on Friday, 5-4, and North Pike won game two, 5-4 Saturday.

The South State Championship and an opportunity to play for the state title came down to a deciding contest in game three.

Pearl River Central trailed 3-0, but came back to tie the game, 3-3, through six innings.

The Lady Devils held North Pike scoreless in the top of the seventh with alert and stellar defense.

Madison Moak reached on an error to begin the frame. Jenna Moak put down a bunt and was safe at first, but the runner, who was heading to second, took off for third. Second baseman Jayden Davis, who covered first on the bunt, made a perfect throw to shortstop Shelby Archer. Archer was covering third and tagged out the runner.

The next batter hit a ball up the middle that appeared ticketed for centerfield that would have put runners on the corners with one out.

Instead, Archer made a diving stop, got up, stepped on second for the force and then fired to first to complete the 6-3 double play keeping the game tied at 3-3.

“That was big,” Pearl River Central coach Tony LaBella said. “It’s real simple, if that ball gets by her, there’s a runner on third and they probably win the game. Not only does she make the play, but she has the presence of mind to turn two. You kind of felt on that play that even though we hadn’t won the game yet, you kind of felt the whole weight of the world shifted onto their shoulders because it was the first time that we just needed to get a run to win today. That play set up everything on our side.”

Going into the bottom of the seventh, the task was easier said than done for Pearl River Central. Score a run and make history.

Madison Gower led off the seventh by belting a pitch off of the right centerfield wall. Archer moved Gower to third with a groundout to second. Jade Latham and Madison Glidewell were intentionally walked.

Keigan Pearson came up in a clutch moment with the bases loaded, one out and the winning run just 60-feet away.

Pearson took a pitch over the first baseman’s head to right field. Gower touched the plate with the winning run and Pearl River Central was celebrating a championship.

“They wanted to walk them because I’ve been struggling this game and I had to show up for my team,” Pearson said.

Pearl River Central will play for the state championship against Neshoba Central in a best of three that takes place Thursday-Saturday at Mississippi State University. Thursday and Friday’s game begin at 6:30 p.m. and Saturday’s game time is to be determined, if it’s necessary.

In the deciding game, North Pike scored two in the first and one in the third to go up 3-0.

In the third, Jenna Moak doubled and later scored on Smith’s sacrifice fly for a 3-0 game.

Pearl River Central had chances to score over the next two innings. They had runners on first and second and two outs in the bottom of the third and bases loaded with one out in the fourth, but were unable to capitalize.

“A lot of missed opportunities early and we thought we were kind of running out of them,” LaBella said. “Three games in the series, they were all decided by one run. Both teams, you’ve got to give credit to them for competing and battling.”

The Lady Devils broke through in the fifth and started the comeback.

Davis reached on two-base error to begin. Gower’s sacrifice bunt moved her to third with two outs. RBI singles by Archer and Latham pulled the Lady Devils to within one at 3-2 after five.

“We had left a lot of runners on base,” LaBella said. “I think to get it to 3-2 was really a big confidence thing.”

In the sixth, Harlee Davis singled and stole second before tallying the tying run on Jayden Davis’ RBI infield single and the game was knotted at 3-3 before Pearl River Central won it in the seventh.

“We had to work together because we all had to come together and get this win because we needed it,” Pearson said about the comeback.

Winning pitcher Latham went the distance, allowing three runs on four hits with four strikeouts, one walk and a hit batter. She allowed just one hit after the third inning.

Jenna Brock singled with an out in the first. She scored on Smith’s RBI single. Smith tallied on Talbert’s run-scoring single to make it 2-0.

Pearl River Central tallied single runs in the in the first and second to tie the game.

The Lady Devils evened the game at 2-2 in the second. Brienne Penton walked and later scored on an RBI single by Davis.

North Pike took a 5-2 lead in the fifth.

Madison Moak walked and Brock singled with one out. Wagner’s RBI single plated Moak with the go-ahead run. Two batters later, Talbert hit a two-run triple for a 5-2 lead.

Pearl River Central came back with two runs in the bottom of the frame with a two-out rally. Archer walked and Latham singled. Glidewell hit a two-run single that plated Archer and courtesy runner Lee to make it 5-4.

Pearl River Central’s last seven hitters were retired and the series moved to the deciding game.