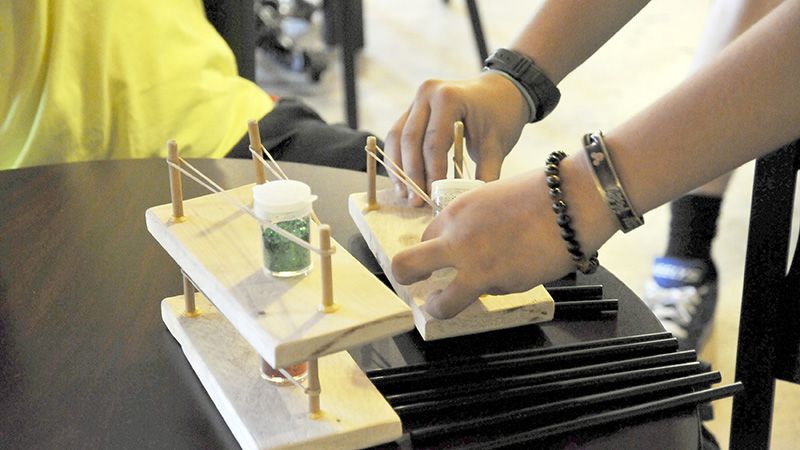 APPLE FROM THE TREE: Camp Chaos will begin with Team Chaos members teaching students about the “Newton Car” to show the parallel between Newton’s Laws of Motion and rockets. Photo by Leah McEwen

Next week, Team CHAOS will hold Camp Chaos at Nicholson Elementary for children who have completed grades four through six. The theme of the summer camp will focus on rocketry and will have students learning about Newton’s laws, Team CHAOS mentor Karen Balch said.

This camp gives elementary students a hands-on introduction to science and technology. The camp will begin with an illustration of the Newton Car to teach students about the parallels between Newton’s Laws of Motion and rockets. Balch said students will be making their own rockets that will be propelled using different methods. Propulsion methods will include water, pressure and others.

“This camp will hopefully generate some scientists and problem-solvers for the future,” Balch said.

Balch said that while the local FIRST Lego League team is comprised of elementary students, there is no robotics team in the county for middle school students. Since this leaves a gap of several years between elementary and high school, Balch said they are looking into the possibility of forming a middle school team to compete in the FIRST Tech Challenge. Because establishing the program will require planning and teacher sponsorships, Balch said it will likely be a while before a middle school team is created.

The camp will be held June 4-8 from 9 a.m. to noon at Nicholson Elementary School. Attendance will be $15 per student, which will cover T-shirt and supply costs, Balch said.  She said there are still several open slots, so if a parent is interested in having their child attend, they can call her at 601-916-6564. She asks that parents fill out an application form by Sunday.

Willis enters plea for the kidnapping and burning of…