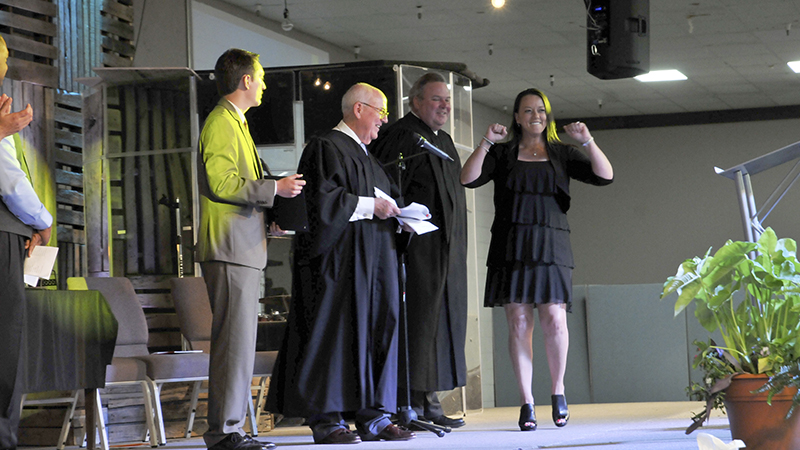 Melinda East does a little dance while she walks up to the front of the stage to receive her graduation certificate. Photo by Leah McEwen

Fifteenth Circuit Court Judge Prentiss Harrell opened the ceremony by thanking everyone involved in getting the program on its feet and gave a short overview of the program.

Harrell said participants must do a number of things to graduate from Drug Court. In addition to drug screenings at least once or twice per week, they must call their caseworker every day. Participants are also tasked with doing something productive, such as going to school, having a job or taking care of a needy family member – otherwise they are required to take part in community service, Harrell said. As a result, Harrell said a large number of participants are either in school or recently graduated from Pearl River Community College.

“Drugs can affect everybody. I don’t think anyone is immune,” Harrell said.

After Harrell’s opening words, keynote speaker Mississippi Supreme Court’s Justice David Ishee took the podium. Ishee said this program is a wonderful opportunity for people to get a hold of their life. He said the certificates each graduate received would symbolize a new beginning and be a reminder of their hard work and dedication to overcome their addictions. He reminded each graduate that they would be presented with these temptations every day for the rest of their lives, and it would be up to them whether they keep them locked out.

“One thing I would like to challenge you to do is to pass it on. You’ve been given a second chance at life. You’re going to go out in the world and you’re going to see people going down the same path as you went down. In fact, you will recognize it before anybody else because you’ve been down that path. It’s up to you to say something,” Ishee said. “You’re here, you’re healed, you’ve made restitution and you’re ready to start your new life. What you do today is up to you. The past is the past. We cannot change it, but we can make a new future.”

Drug Court recently used grant money to hire a mental health professional in order to start a mental health program. Harrell said the 15th Judicial Court is the only one in the state to offer this kind of program. The therapist conducts psychological evaluations on every new participant. He also provides occasional free therapy sessions to those struggling to get through the program, Harrell said.

While the program typically takes three years to complete, Harrell said that time frame can be longer or shorter depending on the participant. Harrell said some of the saddest days of his career were when he was faced with a graduate who had fallen back into drugs and brought before the court again.

After the speakers, all of the graduates walked across stage to thank the people who helped them and receive their certificates. Once certificates were handed out, several graduates gave their personal testimony.

The event ended with closing remarks by Harrell and with a prayer by District Attorney Honorable Haldon Kittrell. 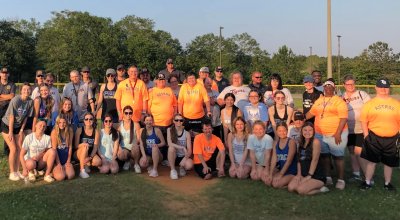