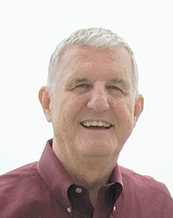 He was preceded in death by his mother and father, Purvis and Thelma Polk, and his sister, Floy Jones.

Dub was born on December 1, 1938, in Picayune, Mississippi. He married his high school sweetheart, Betty Lane Stevens, on September 4, 1959. He was a member of the 1958 State Championship basketball team at Pearl River Junior College and received his Bachelor’s degree from USM.

After graduation, he worked as the Vice President of Human Resources for Pan-American Life Insurance in New Orleans for over 30 years and sat on the Board of Trustees for Pearl River Community College. He was a devoted son, brother, husband, father, uncle, and cousin, a dependable friend, and a faithful Christian who served as a Sunday School teacher and deacon at First Baptist Church of Picayune.

Visitation will be Saturday, May 5, at First Baptist Church of Picayune from 9:00 until 11:00 am with memorial services immediately following. Burial will be at New Palestine Cemetery under the direction of Dr. Keith Warden and McDonald Funeral Home.