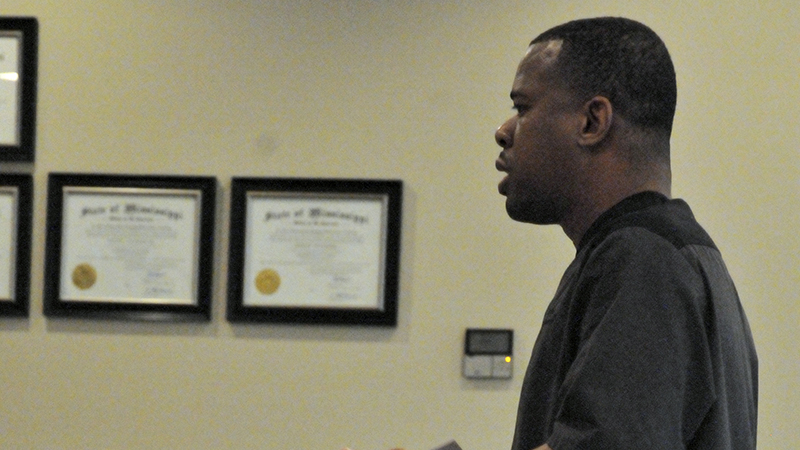 ADDRESSING THE BOARD: Poplarville resident Rodney Taylor shares a formal complaint he filed against the Police Department in regards to an incident on Friday night. Photo by Leah McEwen

After confirming the minutes for March 20, the Poplarville Board of Aldermen went into an hour-long closed session at the beginning of Tuesday’s meeting. Afterwards, it was decided that no action would be taken in regards to what was discussed during the closed session. It is unclear why the Board went into executive session at the beginning of the meeting because the Board and the City Attorney declined to elaborate.

Once back in open session, Rodney Taylor, a Poplarville resident, came before the Board to discuss a complaint he has against the Poplarville Police Department.
Taylor said his complaint was about a fight with gunshots on Friday night at a local gas station that involved his son. After being informed that his son was involved in the altercation, Taylor called several officers for more information about the incident. When no one could answer his questions, he went to the scene of the altercation to make sure his son was okay.
When he arrived at the gas station, Taylor said he saw several officers standing around talking. As he approached to ask about the incident, he was told to step back. Since Taylor did not want to start a confrontation, he said he immediately complied.
Taylor said once the officer in charge, Capt. Jimmy Steinkamp, recognized him, Steinkamp said, “Zach is 19 now. You can’t fight his battles.”
Taylor said he was upset at the implication, and said, “Regardless of what age my child is, there was a shooting. I want to know what happened.”
Taylor said he was later informed by another person that a man had gotten into an argument with his son, and that man raised his shirt to brandish a gun, saying “This is what I have for you,” followed by a racial slur.
Taylor asked Steinkamp if the other man involved had been taken into custody yet, and Steinkamp informed him that they were still looking for him. When Taylor learned that his son had been detained, while the other man – who was the one originally in possession of the gun – had not yet been apprehended, he got upset, saying, “This is a bunch of BS. This is Poplarville for you. Nobody’s going to do anything.”
At this point, Taylor said Steinkamp grabbed him by the arm and put him and his son in cuffs and placed them in a police vehicle for disorderly conduct.
“He put me in the car – said I was disorderly. Never read me my rights or nothing. He did the same thing to my son,” Taylor said.
While it was later decided to release Taylor, Taylor said his son was taken into custody. Police Chief Butch Raby said by phone Wednesday afternoon that the two men were only detained, and later released.
Taylor told the Board that while he was detained, he heard Steinkamp say, “both of them are hotheads – that’s why I locked them up.”
Taylor said that whether Steinkamp had personal feelings about him or not, he should have been more professional.
“My child could have been hurt. He took professionalism out of it. Once he saw it was me and my child, he let his personal feelings override what he should have said,” Taylor said.
After telling the Board his story, Mayor Rossie Creel asked Taylor if he filed a complaint with the Police Department.
Taylor said that he spoke to Police Chief Butch Raby the day after the incident and was instructed to write a formal letter of complaint. He immediately did so and submitted it.
Raby told the Board that he was in the process of investigating the incident. He confirmed that at the time of the Board meeting, the other man involved in the altercation had been identified but had not yet been found. Raby said officers are currently in the process of locating him so they can get his statement.
Once Taylor was seated, Reverend Jimmy Richardson approached the Board with concerns about the situation, saying, “My concern is this, and let me be frank – if it was his son, and I’m not going to bring color into all of this – if it was his son that had the weapon, then I think 30 minutes later his house would have been surrounded because they would have been looking for him. So, why wasn’t the same done to this gentleman?”
Creel said that the issue would be discussed later in executive session, and invited Taylor to stay until the end of the meeting to see if a decision had been made.
Attempts to contact Raby after the meeting for further comment about Taylor’s compliant were deferred to the Board’s attorney Colette Oldmixon.
The Board ended the meeting with an executive session to discuss personnel issues in regards to hiring a full time police officer and full-time operator in the Public Works Department, Creel said.
When asked for clarification concerning the topic of the first closed session during Tuesday’s meeting, Oldmixon quickly interjected and said, “They can’t discuss that. It was in executive session. They came out and took no action. Whatever they discussed – that’s all they can say.”
According to open meeting laws in Mississippi, “The reason for holding an executive session shall be stated in an open meeting, and the reason so stated shall be recorded in the minutes of the meeting.”