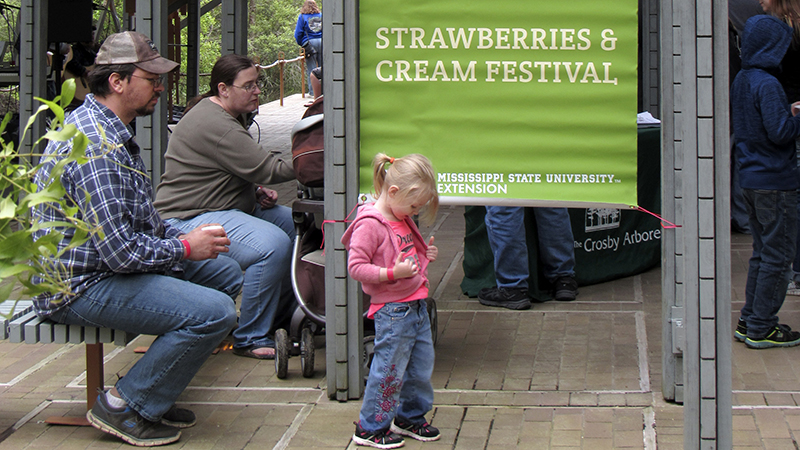 Kenny Rogers and his daughter, Caitlyn enjoy a day of strawberries, ice cream and live music at the Crosby Arboretum’s annual Strawberries and Cream Festival. Photo by Leah McEwen

Crosby Arboretum held its annual Strawberries and Cream Festival Sunday to celebrate the history of the local tourist attraction, which used to be a Depression-era strawberry farm.

The event started at 1 p.m. and continued until about 3 p.m. In the visitor’s center, a table was set up with bowls of ice cream, toppings, whipped cream, nuts and, of course, strawberries. At the Pinecote Pavilion, tables and benches were set up and refreshments were served. A live band played up-beat music, couples talked and danced and kids fed the fish in the pond.

Visitor Stacy Ferguson, said this was her family’s first time visiting the Arboretum. She said they headed to the event after being told about it by staff at the Arboretum’s Picayune Main Street Street Festival booth. She said she and her family really enjoyed the strawberry festival, and they plan to visit the Arboretum again soon.

“Everyone was so nice, and it was so beautiful,” Ferguson said.

Patricia Drackett, director of the Crosby Arboretum, said this event is a way to celebrate the Arboretum’s history while also allowing people to visit the Arboretum for free. During the Depression, the land the Arboretum occupies was used as a 640 acre strawberry farm. While the farm only lasted for a few years, when the Arboretum was established board members decided to keep the farm’s memory alive with the yearly event. Drackett said the festival used to be a formal event, but has since become a way for community members to enjoy a fun, ice cream-filled day at the Arboretum.

“It was a great event. Even though it was an overcast and chilly day, we had a great turnout,” Drackett said.

While an official headcount was unavailable, Drackett said this year’s attendance was one of the best. She said she really appreciated the efforts of the Arboretum’s fans announcing the event through social media.

While this year was one of the best yet, Drackett said she is already making plans to make next year’s event an even bigger success.