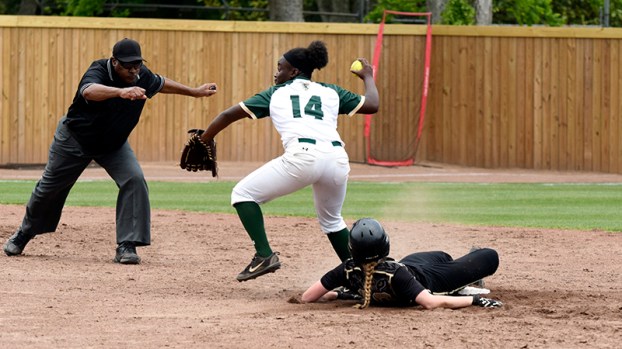 Just like in practice: Poplarville’s Denasia Fulton throws the ball toward third base after tagging out a Mendenhall runner at second base Saturday afternoon. Photo by Victor Tun 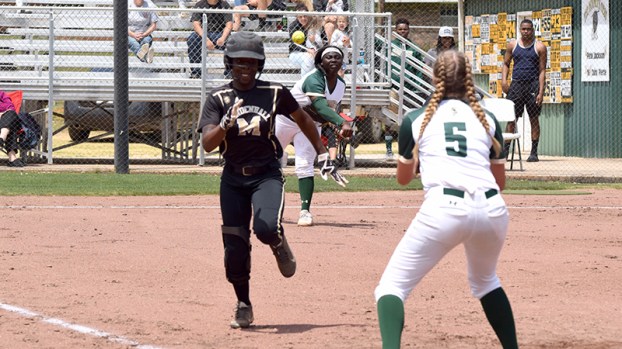 Poplarville’s Manya Gilmore throws the ball to first baseman Hannah Blanchard (5) during the team’s matchup against Mendenhall Saturday afternoon. The Lady Hornets swept the Lady Tigers 2-0 and will face Newton County in the next round of the Class 4A state playoffs. Photo by Victor Tun 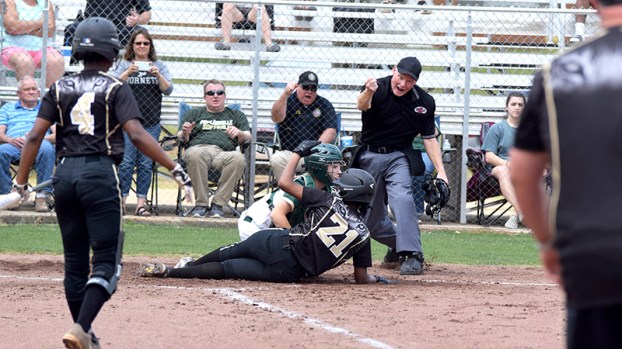 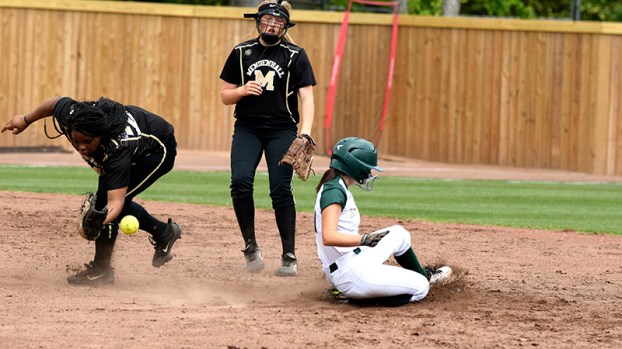 POPLARVILLE — Poplarville’s softball team swept Mendenhall 2-0 in the play-in series of the Class 4A state playoffs.

With the series win, the Lady Hornets (18-7) will face the Lady Cougars of Newton County, winners of Region 5, in the first round. Game one will take place at Poplarville Tuesday at 6 p.m. and Newton County will host game two Thursday at 6 p.m.

“We’re hitting the ball well and we’re playing good defense at the moment,” Poplarville Head Softball Coach Jonathan Ray said. “I feel good about the way we’re playing at the moment. We have a tough opponent ahead of us in Newton County but the girls are ready to play.”

In the first game of the series against Mendenhall, Poplarville won 12-1 and scored three runs in the first inning, four in the second and fourth and one in the fifth. The Lady Tigers scored its lone run in the bottom of the second.

For the Lady Hornets, Manya Gilmore batted 3-for-3 with two doubles and five RBIs, Hannah Blanchard was 2-for-2 with a double, a homerun and two RBIs and Gracie Raby went 1-for-1 with an RBI.

On Saturday, during the second game, Poplarville won 10-1.

During the second inning, Raby scored the first run of the game off an RBI by Aislynn Andrews.

One batter later, with Kayleigh Netto and Andrews on base, Travis hit the ball towards left center field and after two errors from Mendenhall, Travis scored off an-inside-the-park homerun. The three runs scored by the Lady Hornets gave the team a 4-0 lead.

In the next inning, a double to center field by Netto allowed Karlee Rodriguez to score the team’s fifth run of the game.

During the bottom of the fourth inning, a base hit by Travis permitted Andrews to make her way to home plate.

Seconds later, Travis also scored for Poplarville via an RBI off Gilmore. After four innings of play, the Lady Hornets led 7-1.

Andrews, Travis and Gilmore scored the last three runs of the game for Poplarville during the bottom of the sixth.

For the Lady Hornets, Travis batted 3-for-3 with five RBIs, Gilmore was 2-for-2 with two RBIs and Raby went 2-for-3 with a double and an RBI.

Netto and Andrews also had one RBI each.

Karlee Price and Pertuit each saw action on the mound and combined for six strikeouts.

Poplarville baseball: Poplarville swept Florence 2-0 in the first round of the Class 4A state playoffs.

During the second round, the Hornets (11-13) will face Vancleave, who also swept their opponent in the first round. Game one will take place at Vancleave Friday at 7 p.m. and game two will be at Poplarville, Saturday at 7 p.m.

If needed, Poplarville will travel to Vancleave, Monday, April 30, for game three at 7 p.m.

In the first game of the series against Florence, Poplarville won 4-2 in extra innings.

The Eagles took an early 2-0 lead in the third inning but the Hornets tied the game after scoring one run each in the fifth and sixth inning. Poplarville scored two runs in the top of the eighth to seal the win.

For Poplarville, Joey Smith went 1-for-4 with two RBIs and Brady Tynes and Cade Johnson each was 1-for-2. Chris Hughes finished with two RBIs.

Jordan Belsome and Smith saw action on the mound and combined for 10 strikeouts.

Saturday night, during game two of the series, the Hornets won 11-0. Poplarville got off to a quick start as they led 8-0 after two innings and then scored one run in the third and two in the fourth.

Kyle Tynes batted 1-for-2 with a homerun and three RBIs, Smith was 2-for-3 with two RBIs and Canaan Ray went 3-for-4 with two RBIs. Tyson Holston also batted 3-for-3 with an RBI.

Picayune softball: Picayune won 13-0, 10-0 over Natchez in the play-in series of the Class 5A state playoffs.